After a few years working in graphic design, Angela and Samira felt they lacked women in the business to look up to, and whose successes they could aspire to. A couple of years ago they started the book project Hall of Femmes as a tribute to their female role models, with names like Paula Scher, Carin Goldberg, Ruth Ansel and Lillian Bassman on the list. 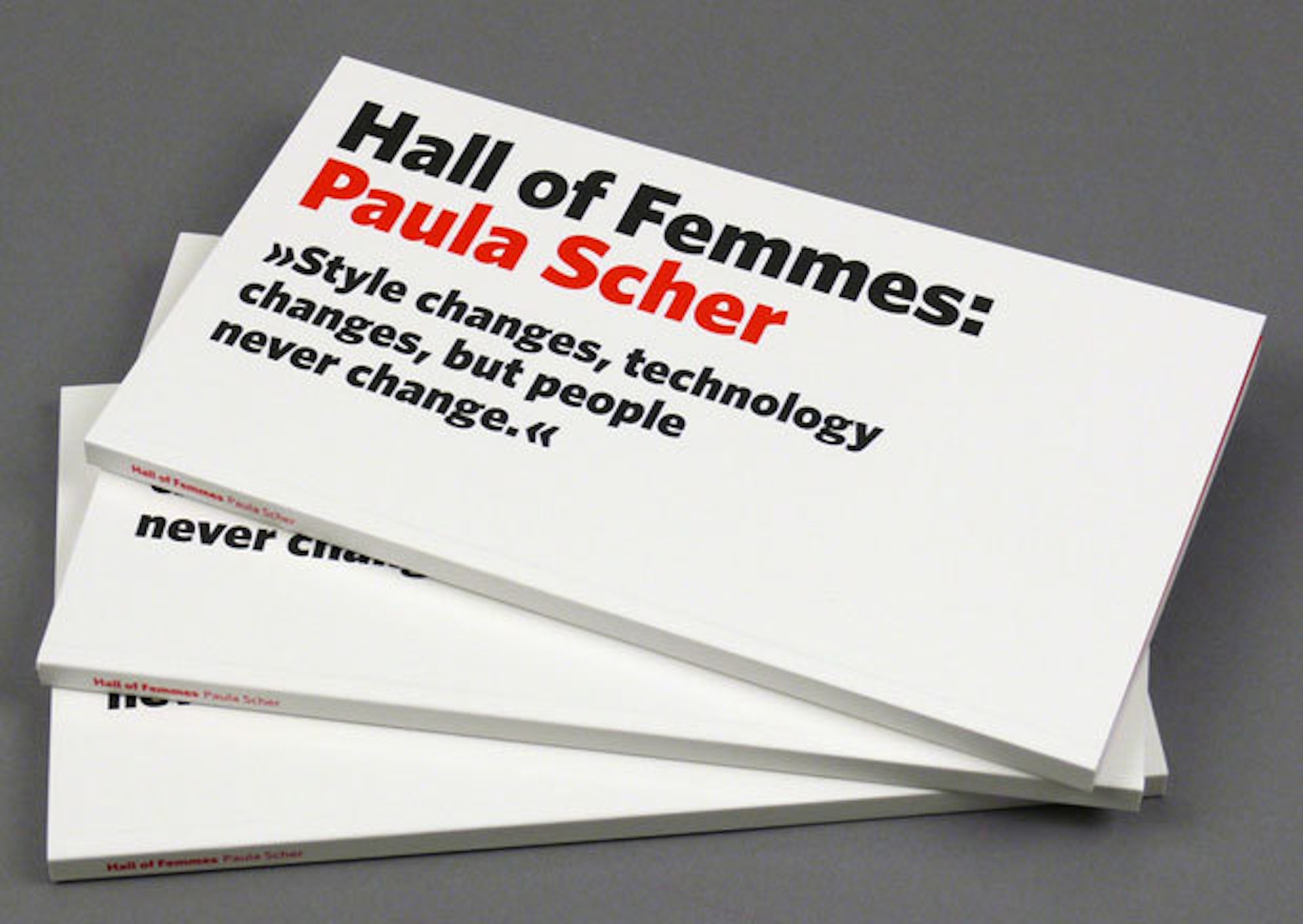 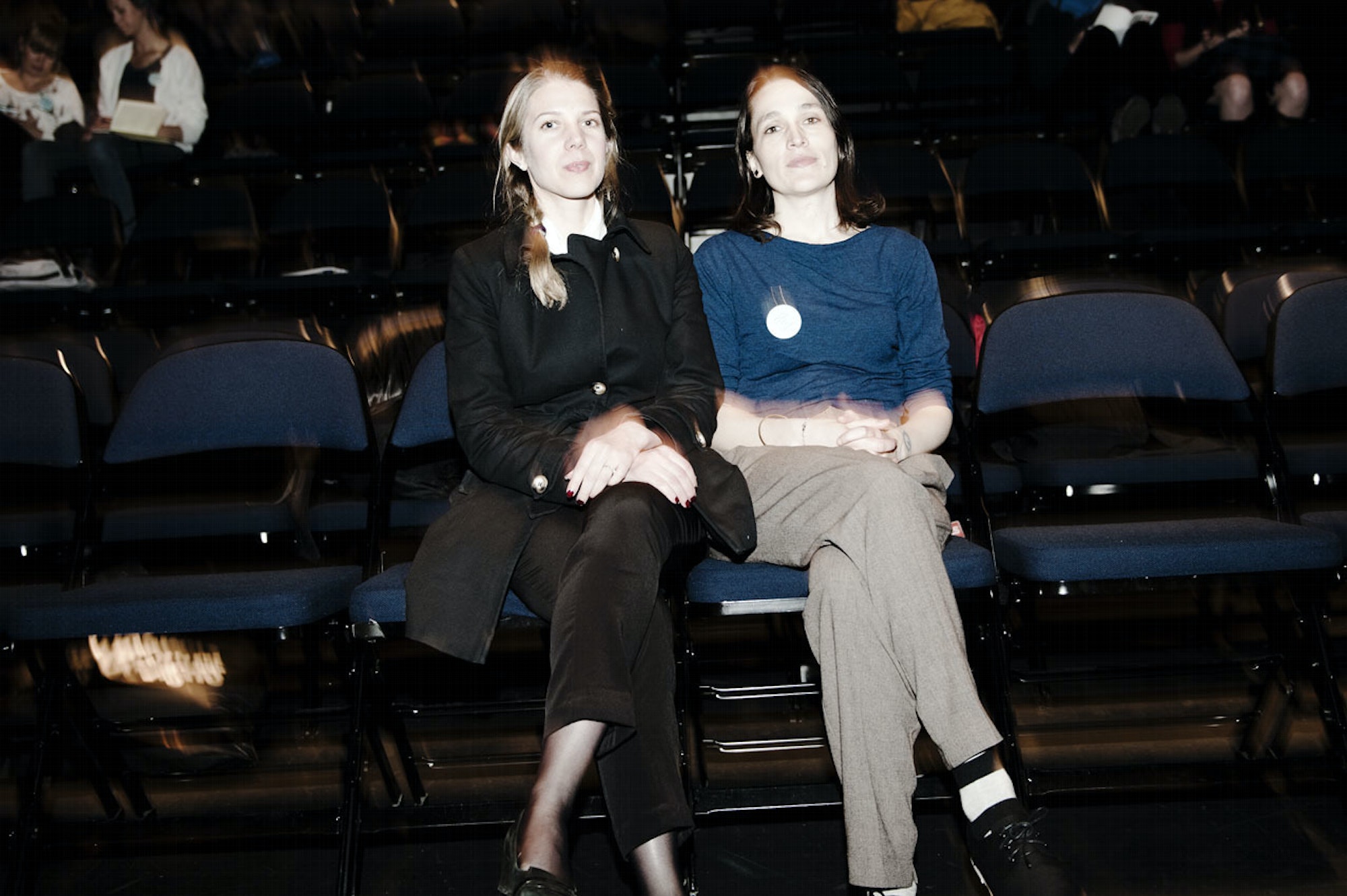 _ How did the idea for this project come about?

Samira: After some years in the industry we noticed that many of our female colleagues were dropping out, so we started to wonder what the reason could be. Besides that, ever since our studies we had been on constant lookout for female role models within the history of graphic design, but quickly came to the conclusion that we didn’t know about any. So we started researching. Asking people, looking in archives, on the Internet and in libraries, basically to find some names.

Angela: Attending design school all designers we knew, and were taught about, were men. All men. No women.

_ You’ve obviously interviewed some strong personalities. Who has inspired you the most, and why?

Samira: Each person we have interviewed is unique, with a unique life. Some have inspired us on a personal level, others professionally. For me personally I would say Lillian Bassman. She is truly inspiring. It’s hard not to be intrigued by her as a person, both being her age, and the fact that she has been present since the beginning of the 20th Century, thus experiencing so much…

Angela:….yes, her life is like a movie, it includes so many incidents throughout a lifetime. And she’s such a charismatic lady; you can’t not be affected by her. Professionally I would say all the women we have interviewed are inspiring, after all they are selected based on our subjective choice. If I had to choose one though, I’d choose Ruth Ansel. She has managed to identify aspects that define our time, again and again. Often it’s sufficient to do this once only, to get noted in the history of design, but she did it first with a classic fashion magazine like Harpers Bazaar, then again in a more political direction, in a different time, with The New York Times, and thereafter in Vanity Fair. I think that’s pretty amazing, and very inspiring. That she’s been in the right place at the right time, several times.

_Did you experience any common features between these women?

Samira: Yes, actually: the verbal communication. All these women are extremely well articulated and good at expressing themselves. In some ways it probably has to do with the American society..

Angela: ..where you learn rhetorics in primary school.

Samira: …but it could also be that when there’s no certainty of anyone actually evaluating your work, maybe you are forced to evolve in this area.

Angela: It was actually something I reflected quite a bit on, attending design school. Often the male students could just show their work, without having to ”defend it”, while the young female students where questioned a lot more often. You’re forced to articulate yourself around your work.

Samira: There is one thing we normally tell our students when teaching design, and that’s how important it is to learn both the craft, but also to talk about it in a neutral and professional way. Women have the tendency to talk down about their own work, and it affects the way it’s perceived. We often notice this when girls come to us for portfolio viewing.

_ In your presentation at Visuelt you mentioned that viewing the design business from a feminist perspective, came quite late?

Samira: We were actually talking about this yesterday, when we tried looking up some new photos on Google for our presentation. We noticed that there were far more pictures out there now, compared to when we started with this in 2008. Searching for Ruth Ansel back then, we didn’t find anything. Now there are so many!

Angela: In that way Google is kind of a good indicator of time, and on society as a whole.

Samira: Angela is evaluating an examination at school now that has a feministic view. Ten years ago I don’t think this would have been an option. It seems there’s a growing consciousness around this now, in our field of practise.

_ In some ways a project like this is kind of ”typical Scandinavian”. Do you think it would have been possible in other countries, like the US?

Angela: It’s obvious that for example in the US we have experienced things differently. Over there feminism is still a bit negative, something bad, with a demonized picture of feminists burning their bras with militant aggressiveness. While in Sweden and Scandinavia we’ve kind of been “marinated” in gender equality, and feminism has grown into something positive.

_You’ve managed to get hold of some of the most famous female names. Anyone you’ve missed?

Angela: Yes, there are some that we are sorry not to have been able to include, of the sole reason that they no longer are with us. Bea Feitler is a lady we wish we could have featured, she worked with Ruth Ansel a lot, and she seemed really interesting and was totally cutting edge. Another person is Cipe Pineles, who was the first woman to join the Art Directors Club’s Hall of Fame in New York, and in many ways always has been number one. She was supposedly the first to teach in the subject and did an array of interesting things. Sadly we can’t do anything about this, but we definitely miss them in our book series.

Samira: In Europe we’d love to feature Rosemary Tissi, and maybe Margaret Calvert, a British typographer and graphic designer. What’s fascinating is, seeing how graphic design is such a young profession in the eyes of art history, meeting these individuals that have been involved since the very start. It has been fantastic.

_A lot of these female designers and art directors have been working in magazines, what do you think is the reason for this?

Angela: I think part of the reason is that these jobs have never really had a high status, combined with the fact that there are so many magazines and papers. I think there also has been a greater acceptance for female representatives, seeing that many readers are women, and last but not least; the pay isn’t very good.

_Have you come to some kind of conclusion after all these conversations?

Angela: I have a simple answer, even though it of course is much more complicated than this, but I think its safe to say there’s a symptom within our profession and culture, that women in many ways don’t feel welcome, that they are estranged. There’s something dysfunctional over the whole thing. This again awakens a thousand new questions, and there’s no simple answer to this.

Samira: I think it’s very important to be aware of this early on in the educational system. Young women actually need female role models, in the same way young men look up to elder men in the industry. It’s important to be aware of which set of values and beliefs one transfers. I think a lot of people don’t reflect upon this. Young men have a stronger tendency to flock together at an earlier stage, starting studios together during their studies, while there are much fewer young women doing the same.

Angela: I think it’s important that women think about what they want. Maybe it isn’t right for them to by all means, be a part of something men have created, maybe we have to create our own way. I think this could result in something better for both women and men.

Samira: We sometimes compare what we are doing with hearing about a great party that we weren’t’ invited to, but were really hoping to be part of. But instead we ended up creating our own party, with our role models and heroines, and this party turned out to be pretty awesome. In many ways even better then the initial party. That feeling...That’s a good feeling.

_You have more books up and coming. Any other exciting projects?

Samira: Yes, we have four more books in different stages of the process.

Angela: And we are planning a seminar titled Hall of Femmes at Moderna Museet in Stockholm. You are all welcome!

_After meeting all these inspiring individuals, have you got any good advice for young women starting out in the design business?

We’ll use the words of some of the inspiring women we’ve met: