Exploring how the taste of food is influenced by synaesthesia, performance and setting, Bompass & Parr design spectacular culinary experiences often working on an architectural scale with cutting edge technology. The studio has grown into a team of cooks, specialized technicians, architects, graphic designers, and administrators. Experimenting, developing, producing, and installing projects, artworks, jellies and exhibitions. 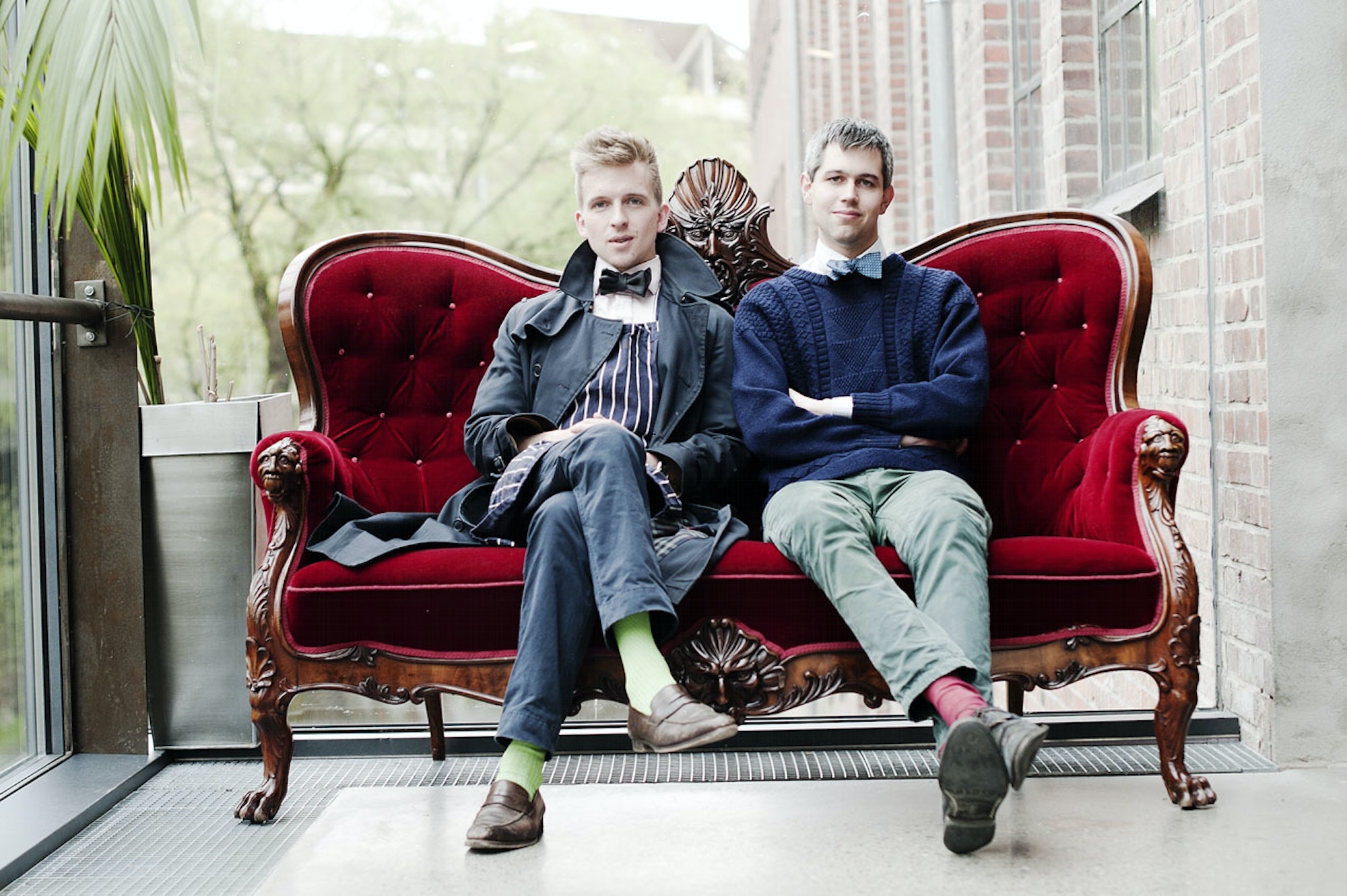 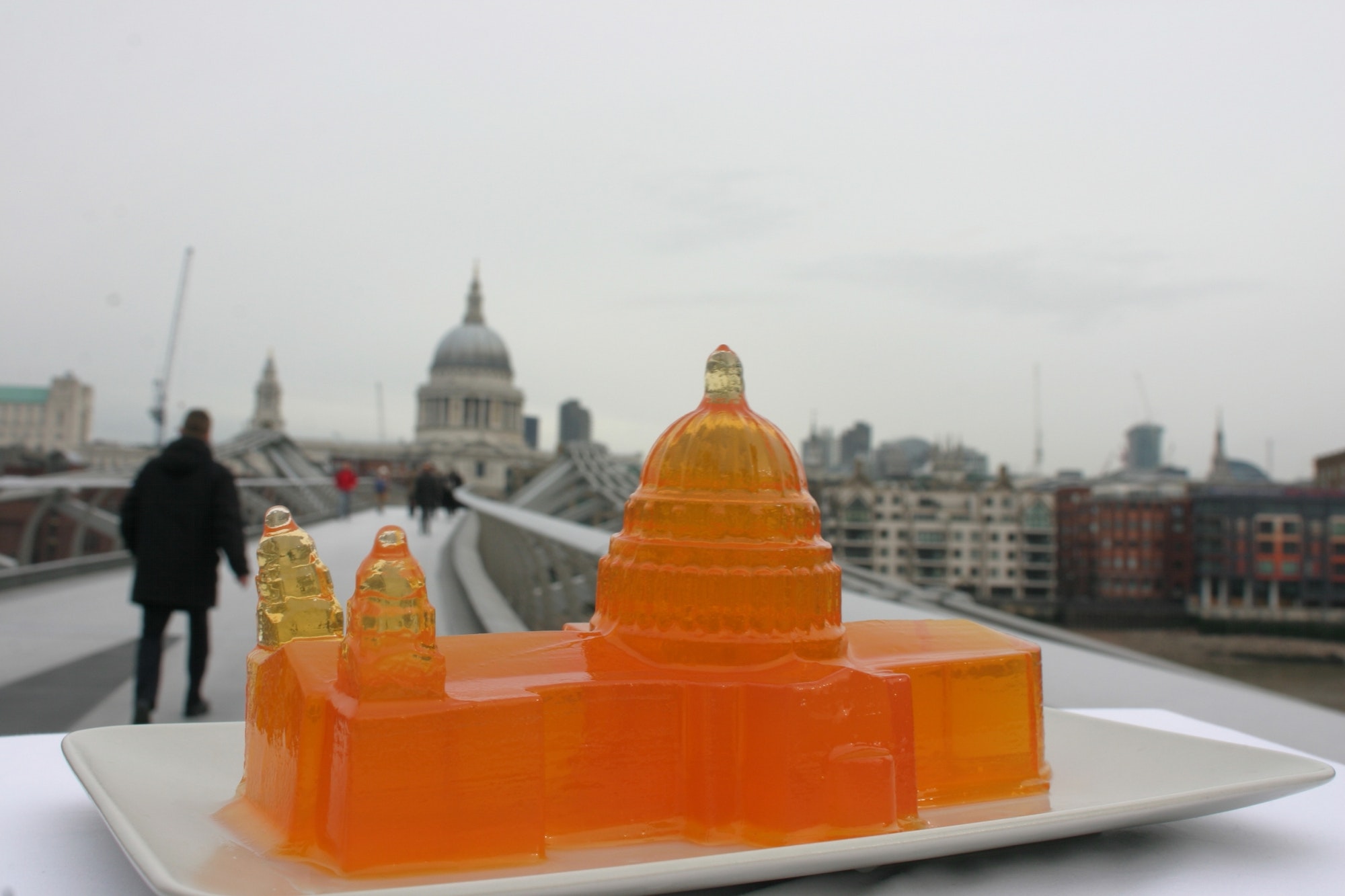 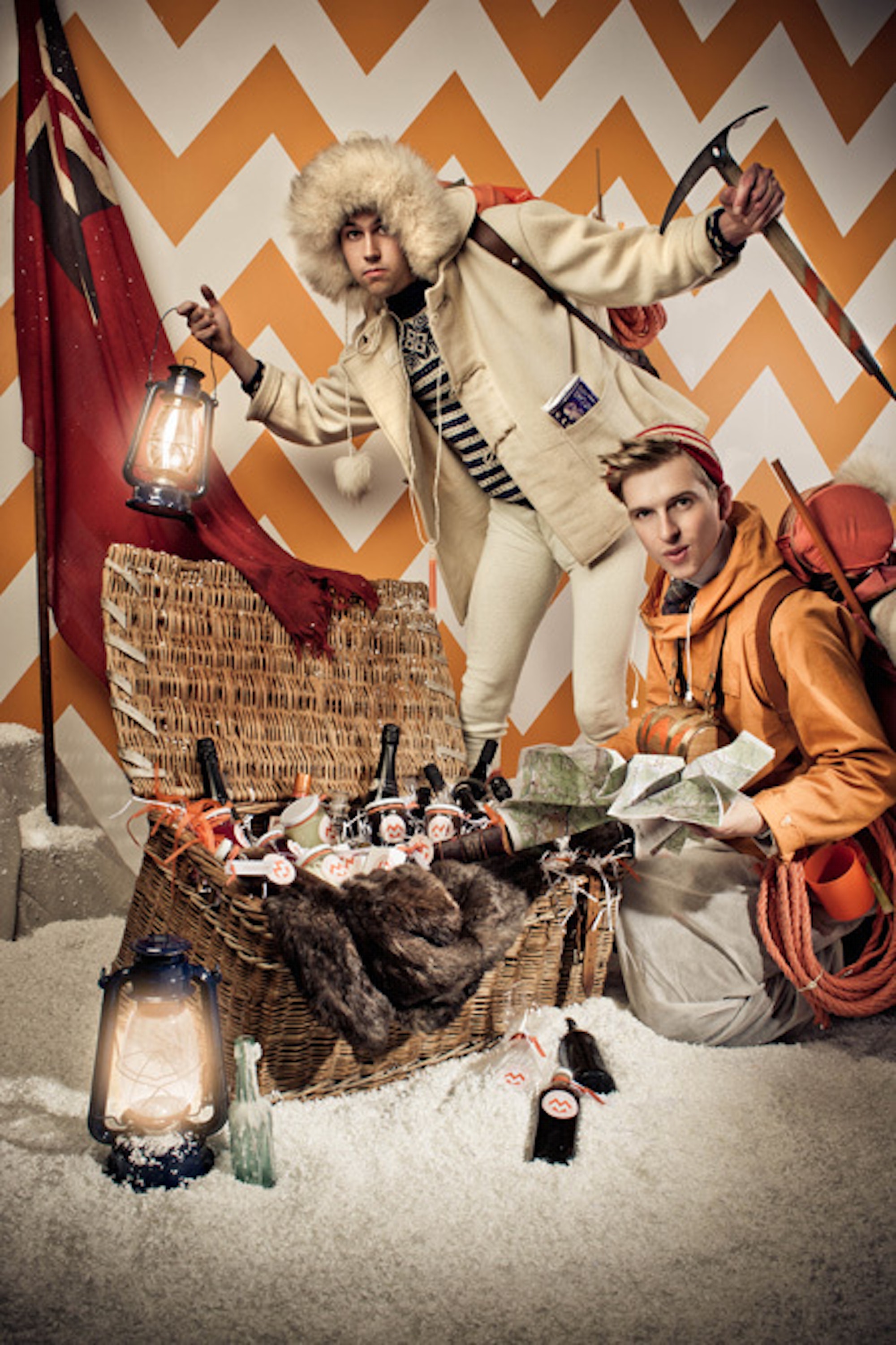 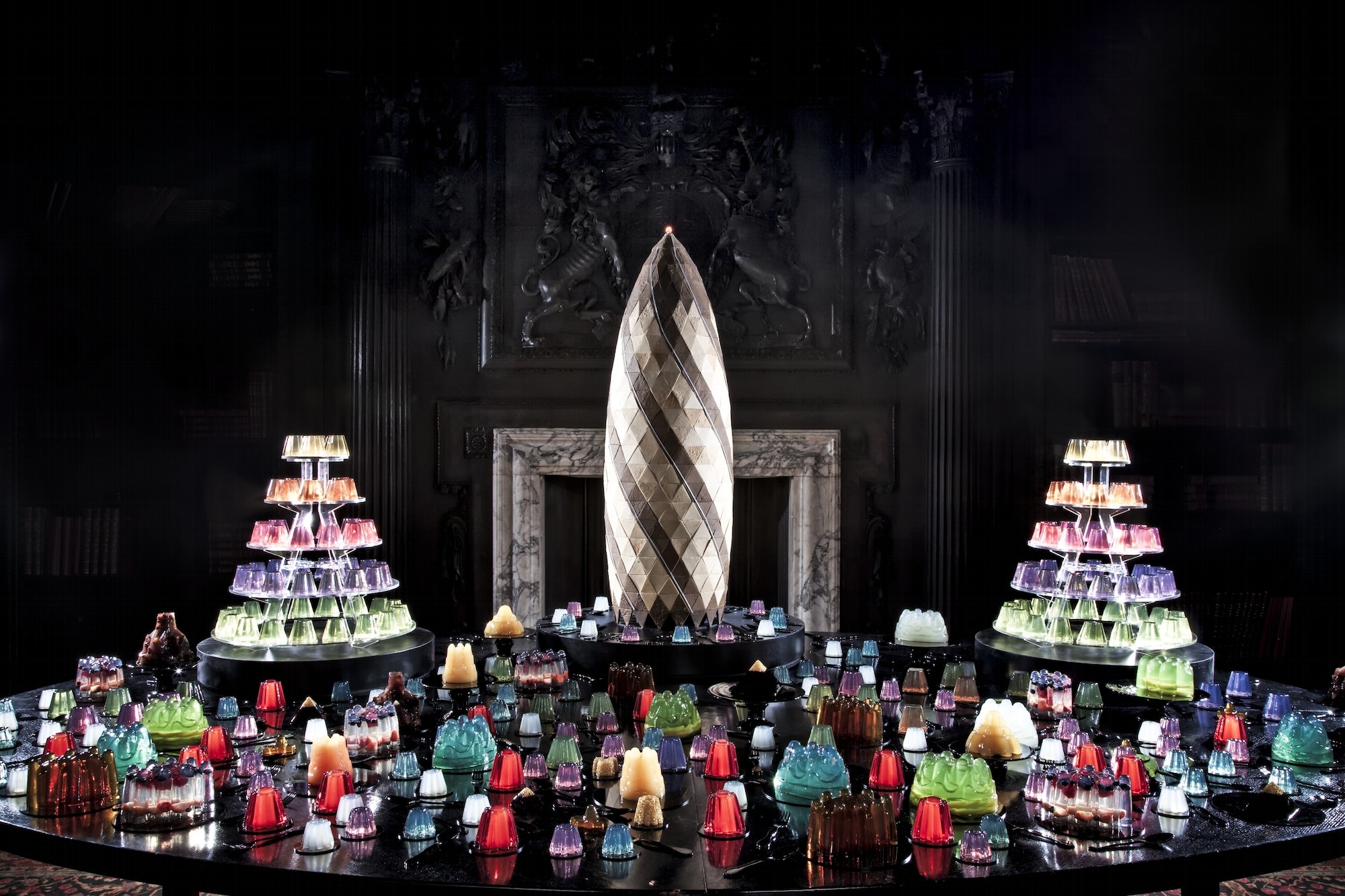 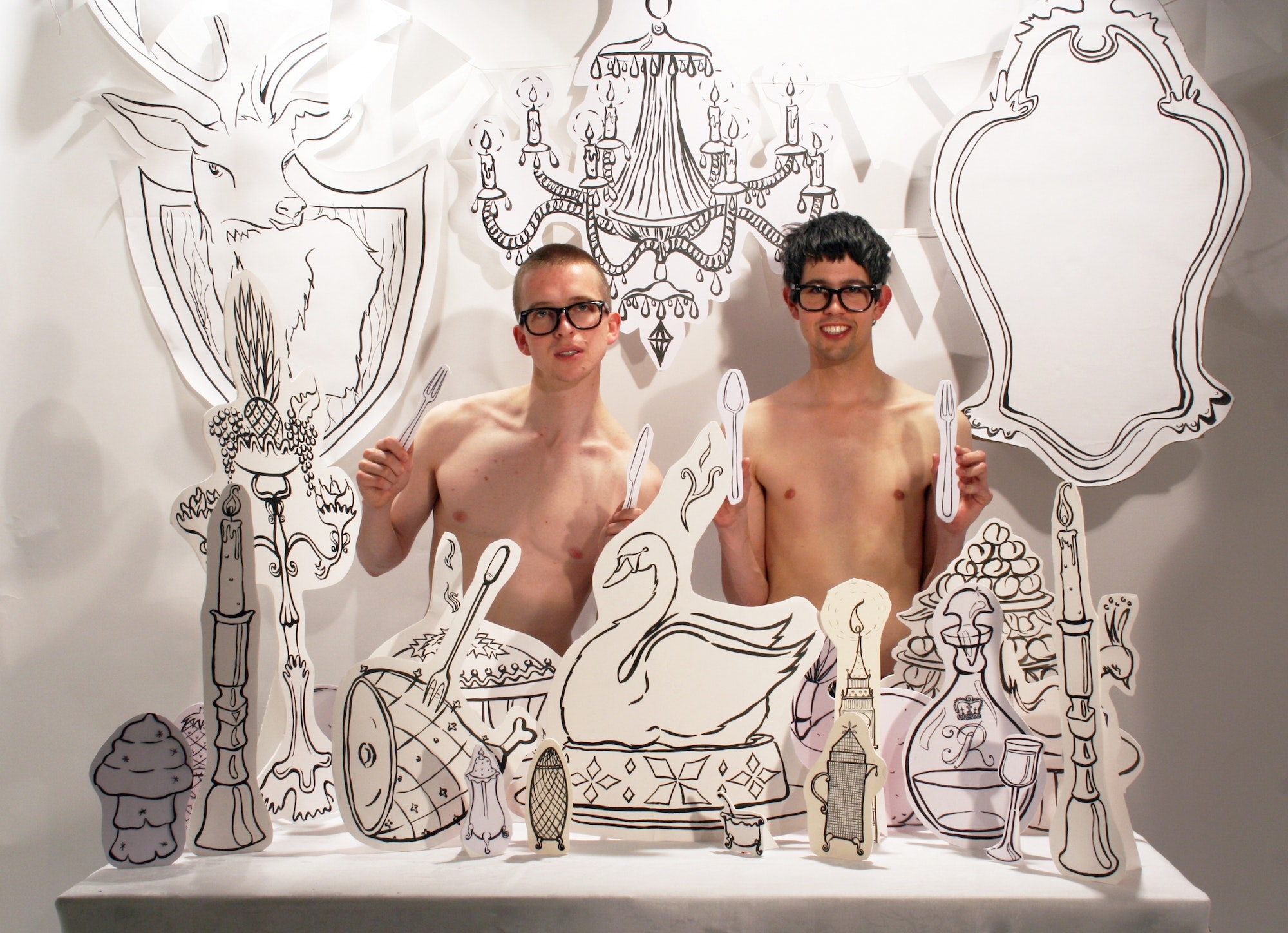 _It seems food concepts are a growing trend right now, any thought around this?

Sam: In terms of food trends, I think food’s become just like fashion: with trends in itself. Everyone’s got a food blog or are hosting a supper club, which is great! It’s part of an interest.

Harry: When we started it was in a way a reaction against the Internet, because people had started to do these food things online, which everyone thought would be amazing. But in fact the Internet wasn’t really developed enough to make it all happen. For us it was about doing things in the real world.

Sam: With this sort of approach to food, what we try to do is walk a fine line and develop a lightness of touch. The food we cook is really simple, stuff people understand. I think when you get to really high-end food where people need headphones to eat it, it’s kind of baffling, and I find it less enjoyable. It’s really nice when the food is kept simple and excellent. We are very playful with food, but if you do it the wrong way it can seem very wasteful or actually just    physically disgusting. It generates a lot of food waste, which it not a good thing. We try to get the balance right. Something that’s celebratory, but also wonderful.

Harry: When we started there was definitely a big organic movement, with healthy eating and such, but it wasn’t fun. And then there was Michelin starred molecular gastronomy, and that wasn’t fun either. It had elements of fun, but somehow something was missing about what food is about. Which for us is bringing people together, sharing, doing something fun. Creating an experience. Not being an amazing chef.

Sam: One of the things that I really like about food is that there’s a very low barrier to entry. If you want to be an amazing graphic designer or architect you have to train and work for years. You have to learn all these complex programs. If you want to cook an excellent meal, anyone can look on the Internet and get a recipe. The stuff we do is not hard. Now some of the things are probably quite hard, but the first things we did, anyone with Internet could do. And I love that, getting emails from people saying “I’ve done this” “Check this out” It’s cool.

_There must be a lot of trying and failing?

Harry: Definitely a lot of failing. All the time! But I think it’s about a will to succeed. It’s more about setting goals, saying you can do things to a client, and you have to do it. So you’ll work out a way and force yourself. It’s about progression. Having an idea and going for it.

Sam: We’ve literally got a long list of ideas we want to do. And basically we spend a lot of time going through these. It’s interesting if it’s a new idea, something we don’t quite know. Or getting to talk to world experts on the field. You learn so much. A lot of the projects we have done in the past, we sat there and thought “right…well, we could go make a career and make a fortune, just doing this. Just rolling it out and franchising it. Just sit here reading business spreadsheets and doing management and stuff like that.” That’s great; you can buy a yacht or whatever you spend your money on. But I think its more interesting doing something amazing. And continuing to learn.

_You work with a broad team of expertise?

Harry: Our core team is small, but we like to work with people that don’t say no, and can make something happen. We bring in other peoples expertise. For them it’s a new and exciting thing, in most jobs you always do the same. We want to use our knowledge to do this with people like that. Everybody thinks it’s interesting. Everyone wins.

Sam: Also, we always have a lot of alcohol around, to bribe people. It’s very persuasive.

_Yeah. The jelly you passed around through the lecture was pretty strong.

Sam: I was making it late at night. It was literally the ingredients I had around…

_Can you make jelly anywhere?

_How’s a normal workday for you?

Sam: It’s like PowerPoint’s and stuff. But then you do get to go off every so often to make up some weird pops…

Harry: ..or flood the office with chocolate.

_You have quite different backgrounds; Harry within architecture, and Sam in geology. Do you have specific roles in your projects?

Harry: I do most of the practical things, like working up how it’s going to be built, or drawing it, ordering the bits, budget.

Sam: I just get really excited about things! Just like, really excited! That’s it. Nothing else. I just sit there at the computer as Harry’s designing things and start going “that’s amazing!” I remember when I was six, and my mum made me a flying helmet and I just sat by the sewing machine and was so excited. That’s kind of what I feel like every day, all the time.

_When you get a project, what do you do next?

Harry: We try to try out things. We should probably try more though. Like with the chocolate, we did a lot of choco-pumping.

Sam: We can do a lot of stuff indoors. Harry is good at building our stuff. But the scale of our projects now, they are too big.

Harry: We could do anything, and we piss of our neighbours. They are all proper businesses.

Sam: We try to organize it better. We do detailed projects as well, but we like to get our hands dirty..

_What would be your absolute dream project? Or are you actually always doing these?

Sam: We kind of get to do quite a lot of them, which is really cool. But it would be trying to look at larger scales, which is always interesting.

Sam: But then there was an open throw out to everyone here; how can we do our Cocktail Organ?

_Have you met any criticism for food waste etc?

Sam: We are doing things on a tiny scale, if you see it in perspective. Like, if you see this building we sit in, that’s much more impressing.

Harry: I was thinking of how the centre of the earth is like really, really hot and molten. Our problems are not that great in the scheme of things. Our whole civilization is built on top of hot lava that can come out any time. It’s all in perspective.

Sam: Problems like that are massive. A lot of our projects have hair rising and terrifying moments…

Harry. Personally I also think you can’t really come up with problems. The human brain can only imagine so much in that size when you are just two. You only get the real problems if you are too many people. When people don’t know what’s going on. Like the BP disaster with billions of barrels of oil getting spilled out in the sea. You can’t conceive the whole thing.

Sam: There hasn’t been a big jelly emergency yet. But we had a chocolate incident. A chocolate spillage. And it went towards a lake, and the lake had to be protected..

Sam: But we got it sorted out.