Felipe Ridao held earlier this year a talk and two days open workshop in Madrid. The topic was design thinking and visual communication strategies for the development of independent projects at informal public spaces.

– Focusing on unwanted plants as a muse, during the first day of the workshop we analyse them in detail and developed the “Unwanted plants manifesto”. During the exercise, it was resolved to write it straight over street posters. To our surprise, all posters in the area were of a political party featuring images of Stalin, Lenin, Engels and Marx (!). This coincidence did not affected the manifest itself, but added a right quota of humour and of criticism to dogmatism.

– During the second day of the workshop, each participant followed the “Unwanted plants manifesto” for the creation of a game for the appropriation and definition of informal public spaces on a specific neighbourhood of Madrid. The presentation of results was done with the participation of the assembly of neighbours of the area, who later on continued the discussion and considered the ideas towards future implementation.

– This Manifesto was applied to the workshop itself, as well as to all instances of the presented projects, conception, communication, production, etc. The “Unwanted plants manifesto” appear as an evident critic to the role of creative industries regarding global warming, and as a propositive reassess of its current submissive posture. Proposals by participants were feasible, open and intimate, highlighting the active participation of the author, who worked from his or her current situation, WITH the neighbourhood and not FOR it –as usual. This approach helped to strengthen bonds between students and neighbours, while facing critically the current role of creative industries in the production of public space. 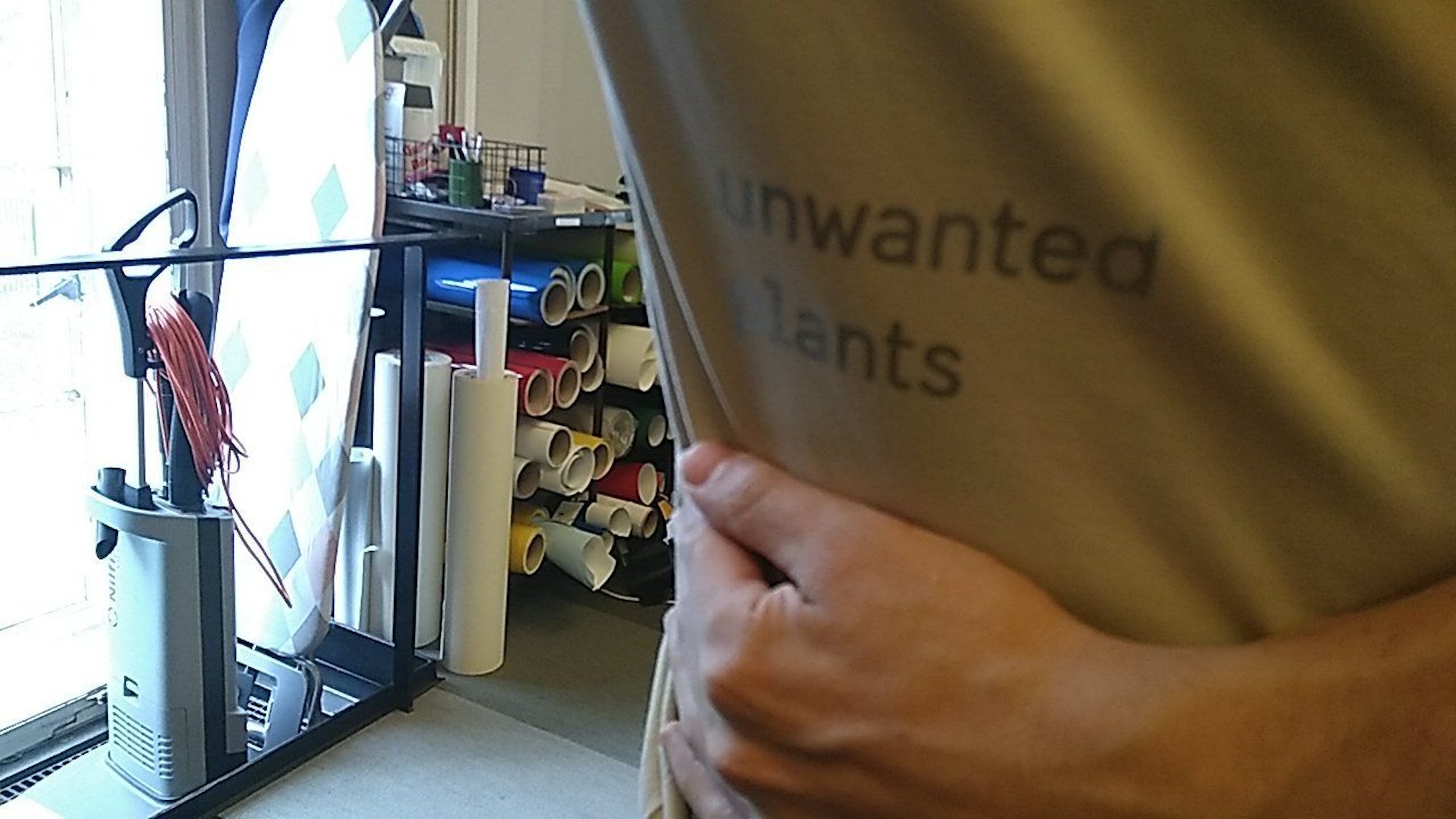 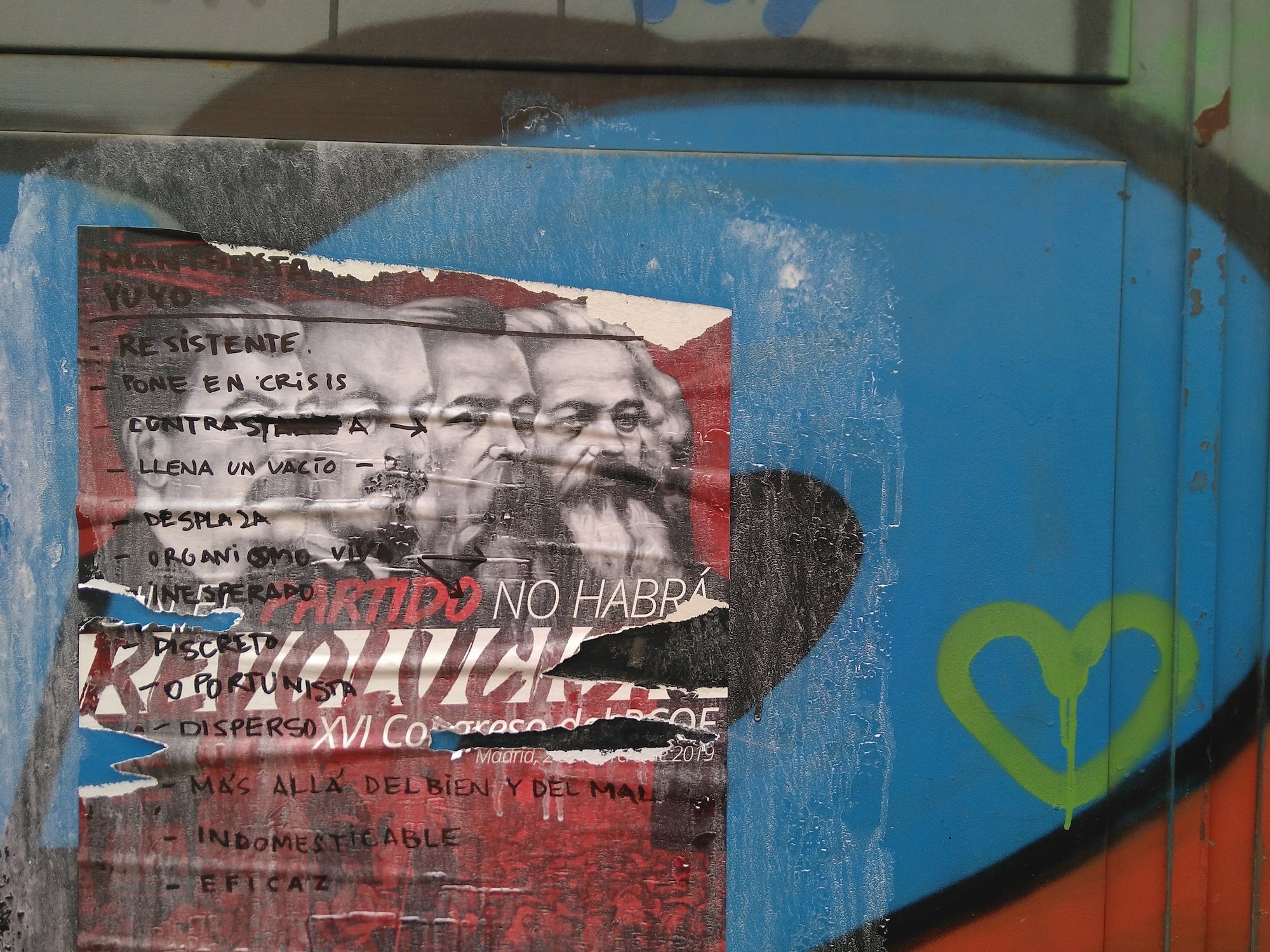 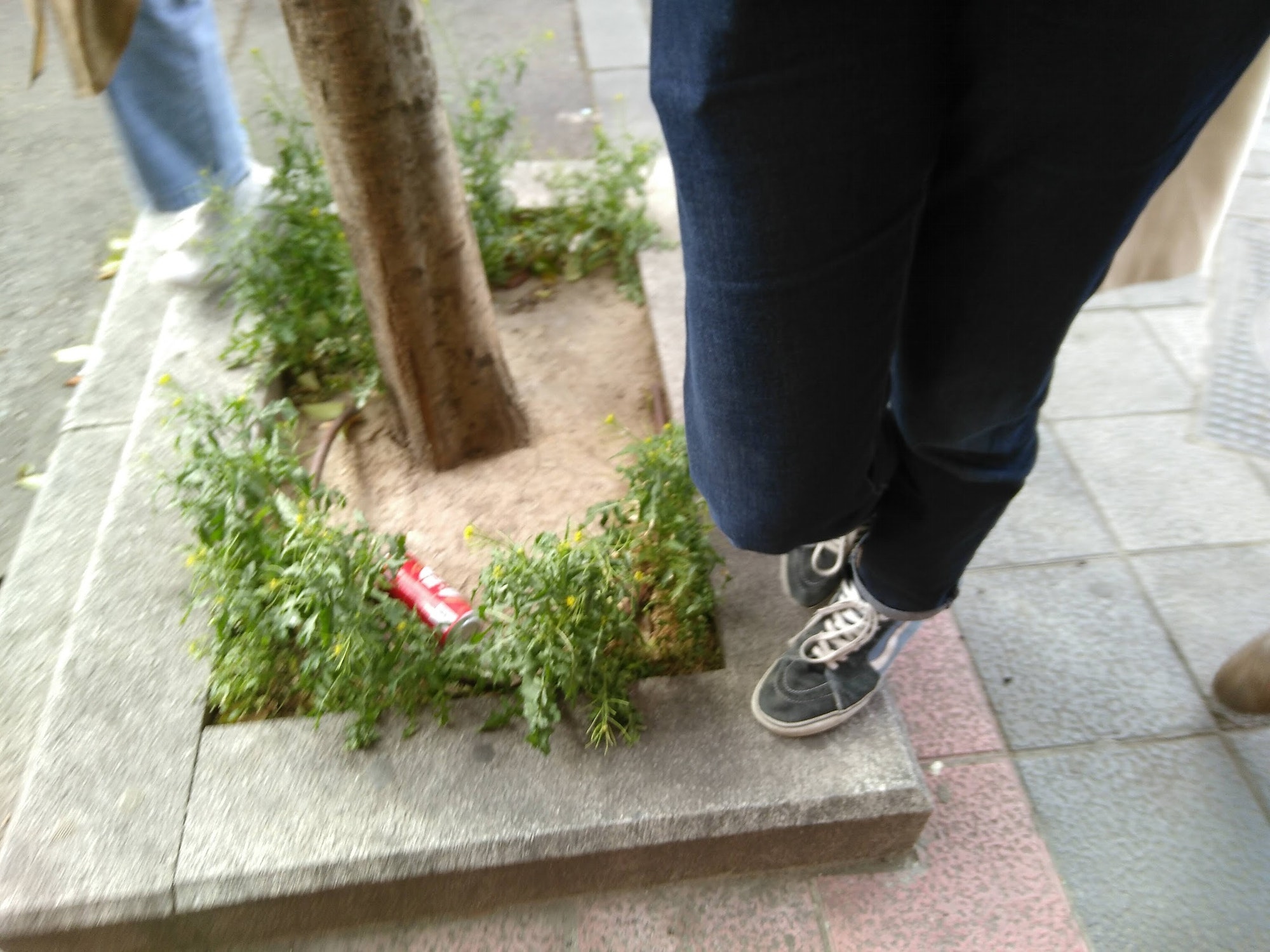 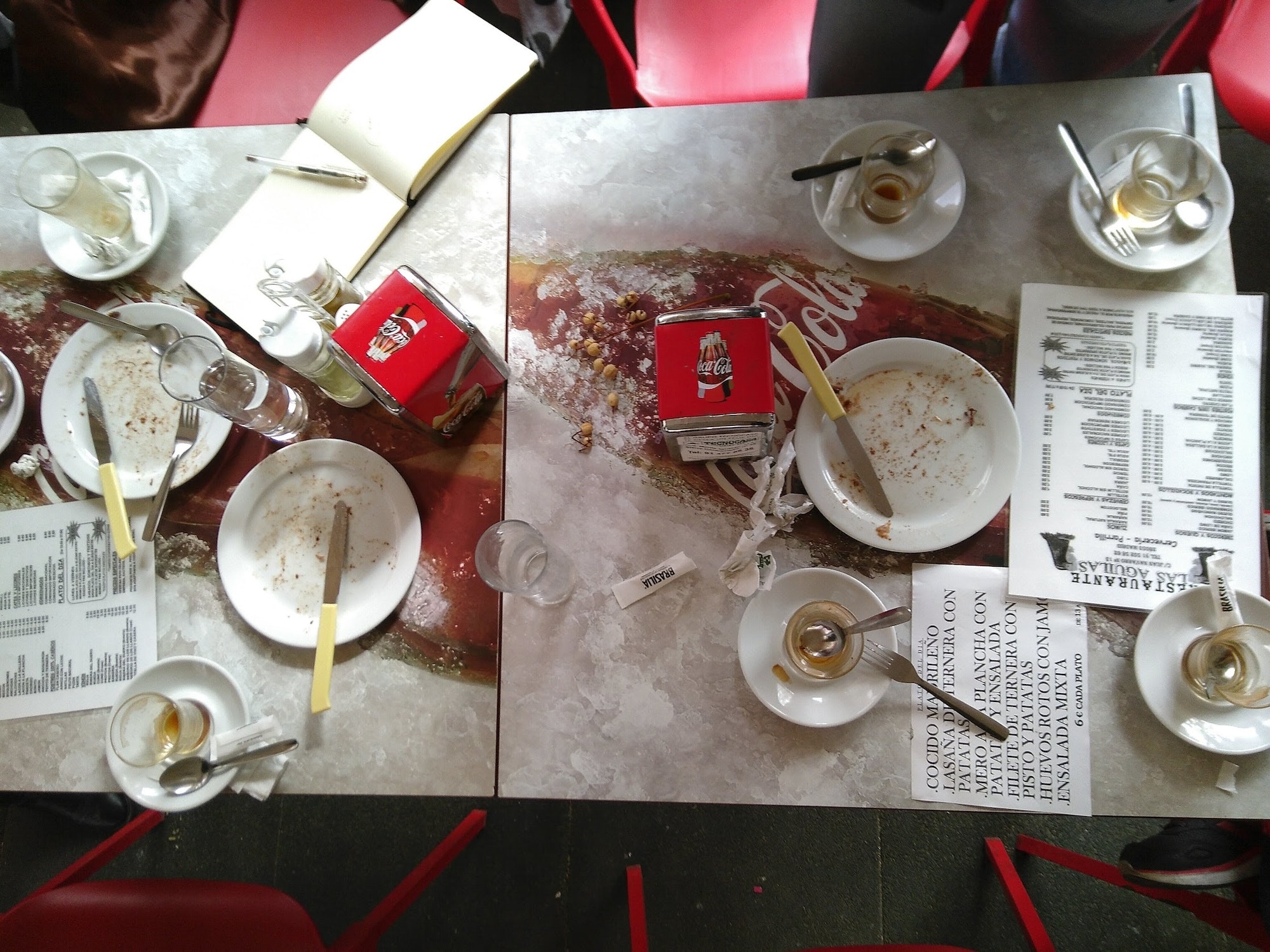 Felipe also made an exhibition at an open square at Tabakalera, an international centre for contemporary culture. The exhibition was a fugacious show about our use of photography for communicating diverse initiatives, particularly in poster-design, and had hundreds of visitors.

– The exhibition was presented as an installation expanding the store area of the contiguous local. This characteristic helped the relational aspect of the whole experience, justifying my continuous presence on the show. Every day (9 to 9) I was dressing a uniform and attending this area. The shape of the poster exhibition based in a demolish card castle (House of cards in spanish is Castle of cards) highlighted that “perception requires involvement”, maxim by the conceptual artist Antoni Muntadas, –with whom I did an artwork in 2004– who coincidentally was in Donostia for a day and visited the exhibition. I met him as well as hundreds of visitors from diverse backgrounds, sharing past experiences, delving into specific cases, and points of views about the ubiquity of photography on everyday life. In addition, printed materials were shared in a bartering modality, rejecting any economical transaction. Thus I received multifarious creative answers for achieving copies of the exhibited printed ephemera such as posters, postcards and alike.

– For the exhibition were reprinted several posters I did in the past 20 years, which were all taken during the demontage. Exhibition also featured originals of the last poster I designed, which are collages, and diverse printed ephemera (publications, postcards, small printed artworks including photographies).

– Materials used for the installation included OSB plates from the former signal system of the cultural centre. Timber that was just stored for becoming garbage. I also used debris paper from exhibitions at DOGA for printing the exhibition text (translated to the four languages the cultural centre use -Euskara, Spanish, French and English–), for uniforms I reprinted on t-shirts from past project æDEG15, and I also used a “do not touch” sign that was debris from the Oslo Architecture Triennale 2016. Prior to the show I also coordinated the reuse of almost all materials I used for the show. 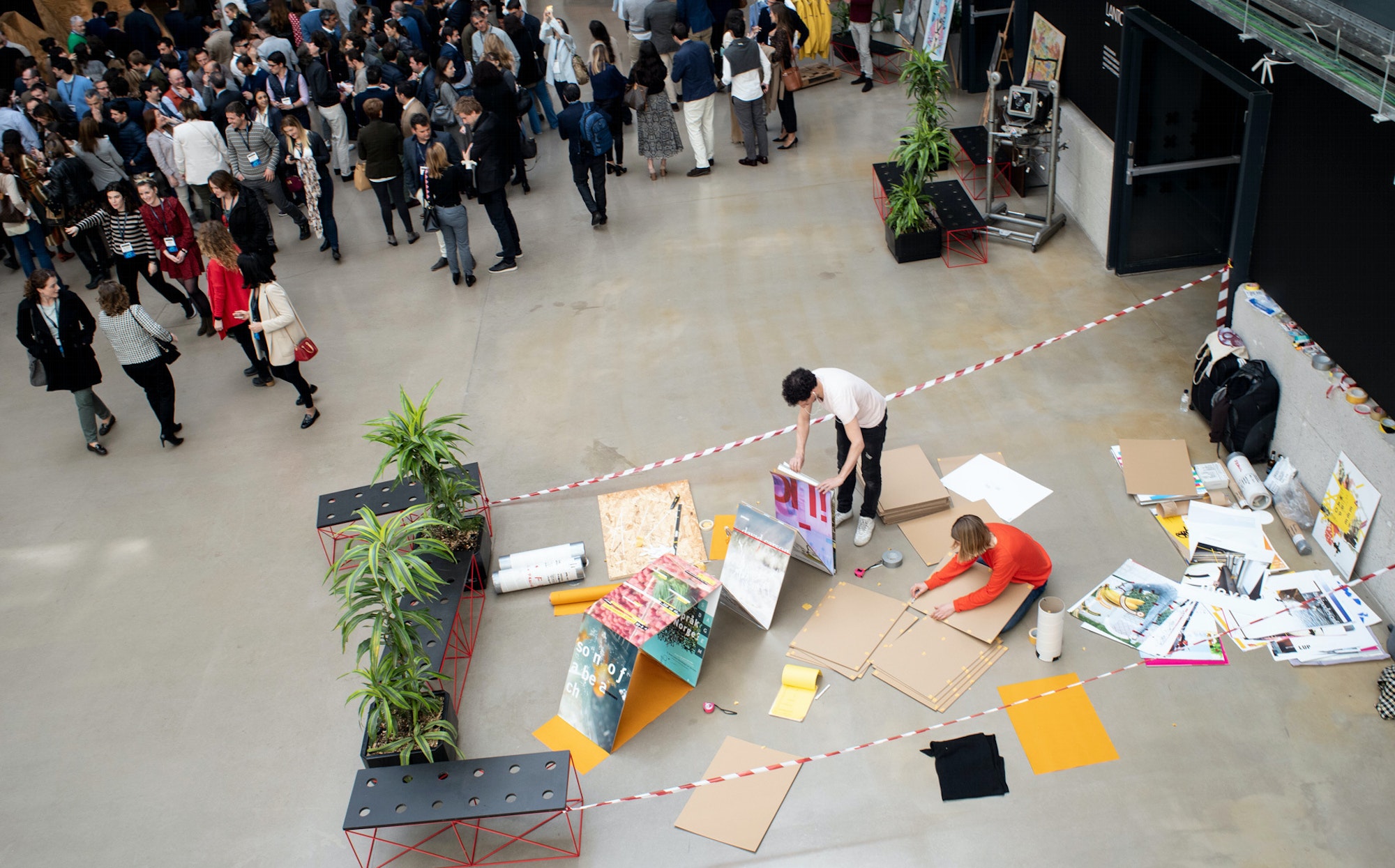 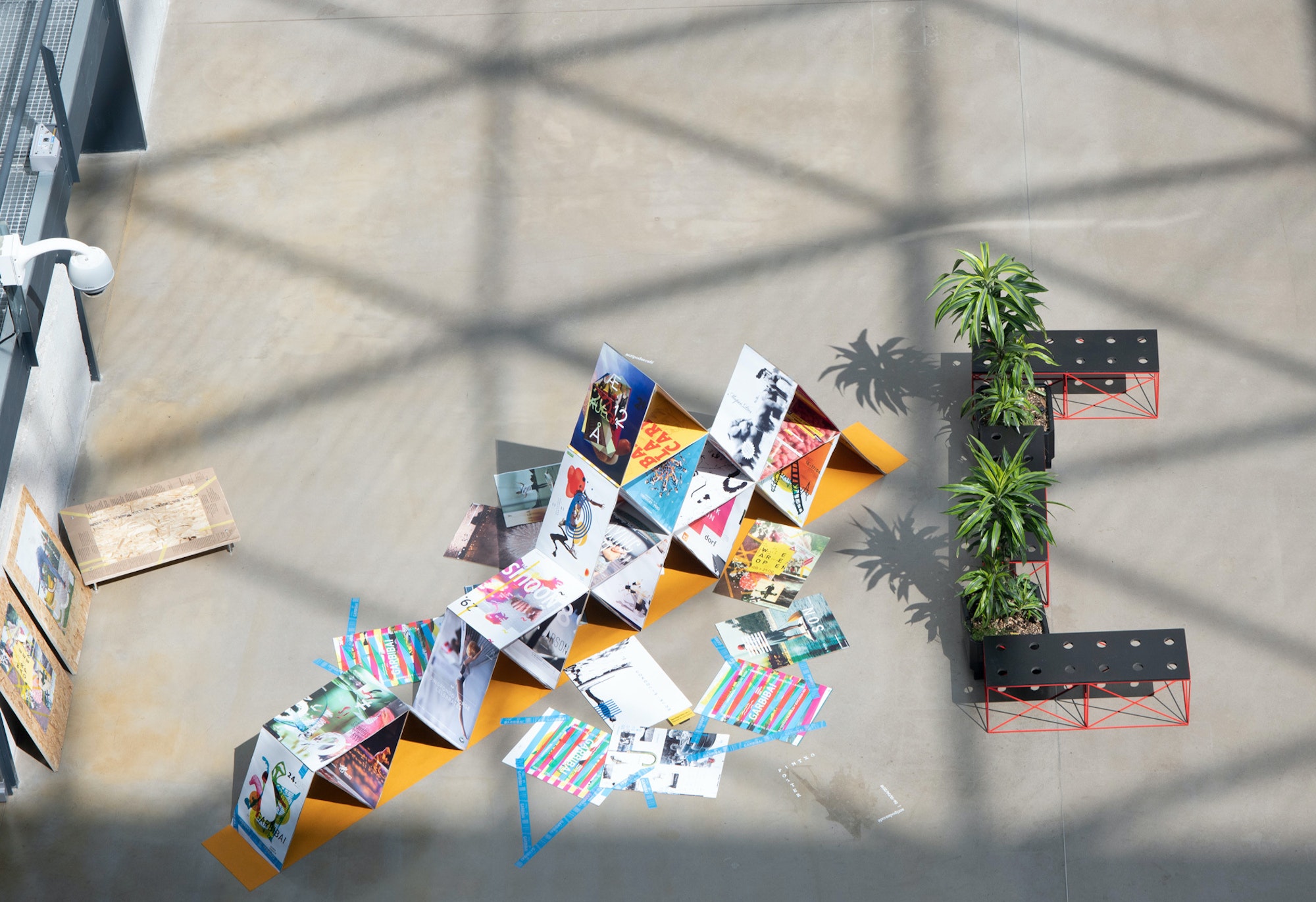 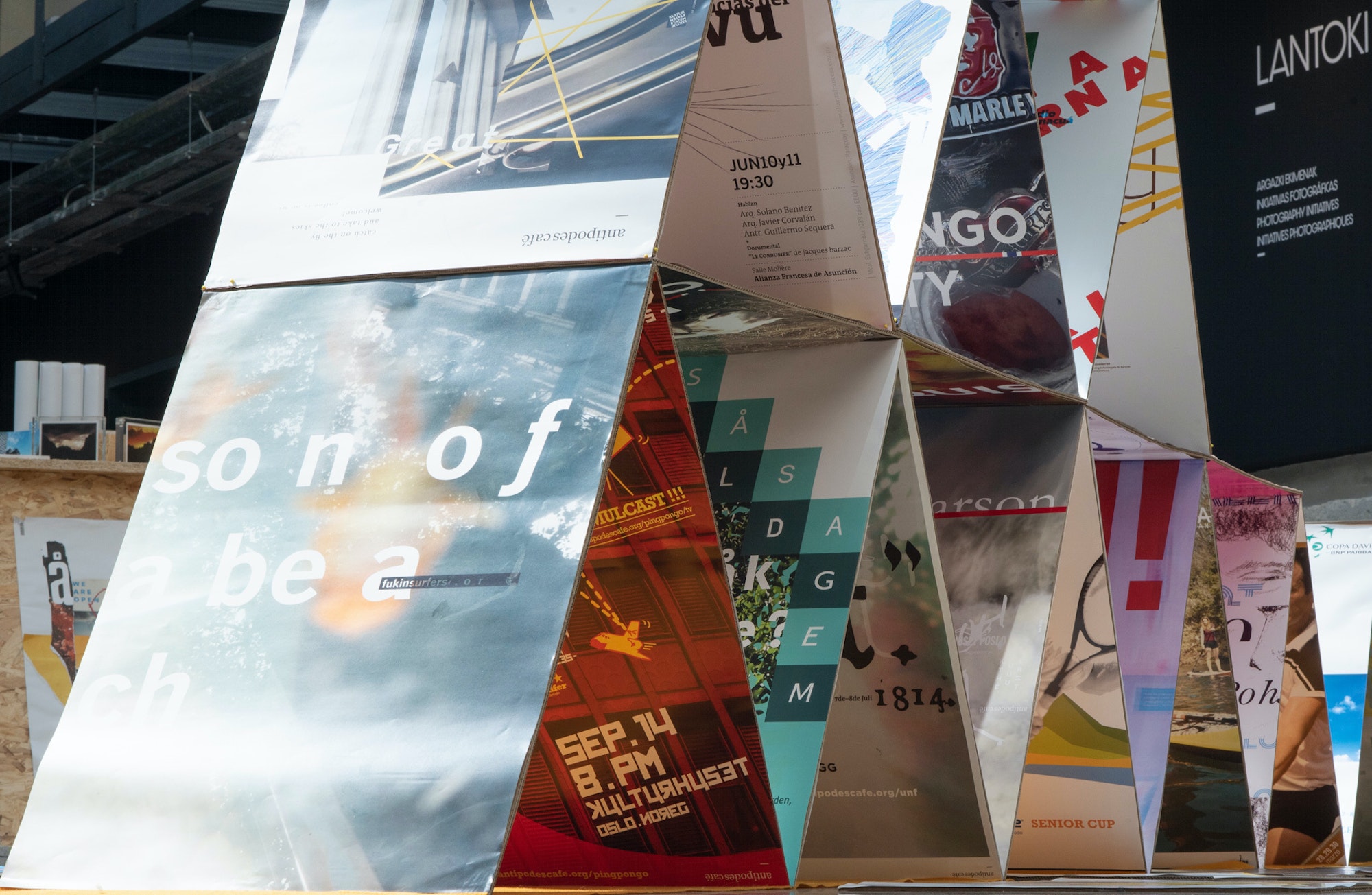 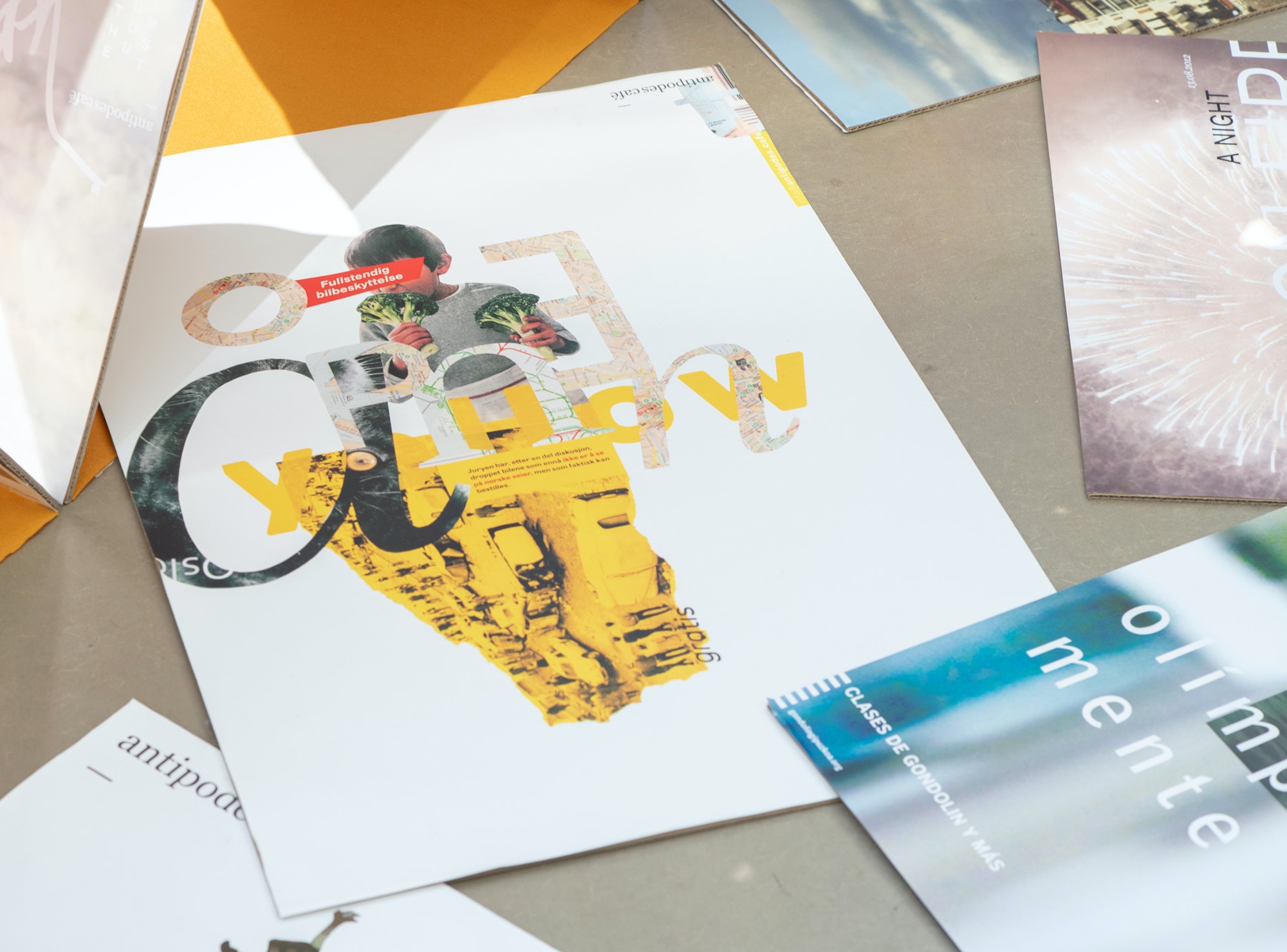 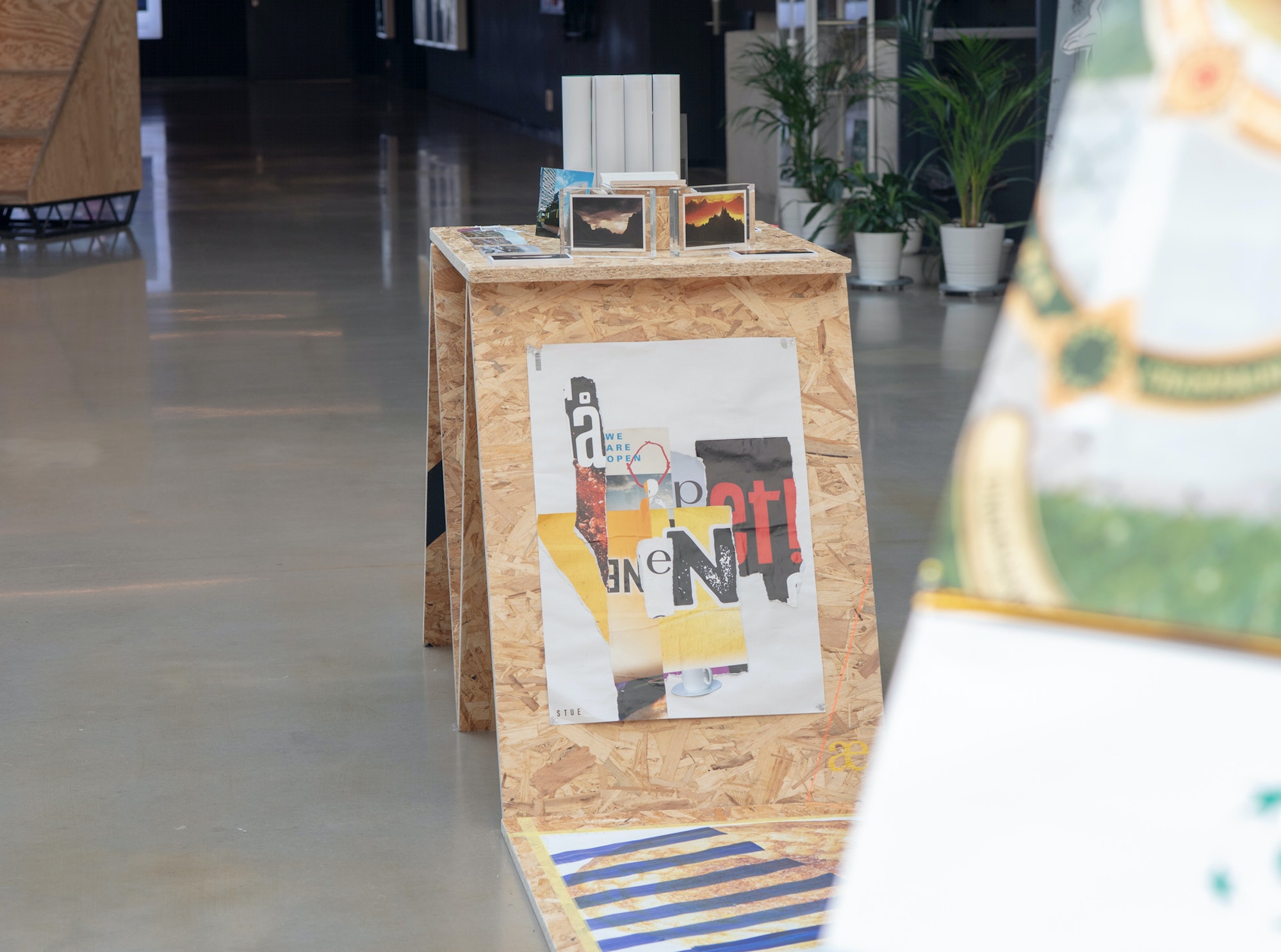 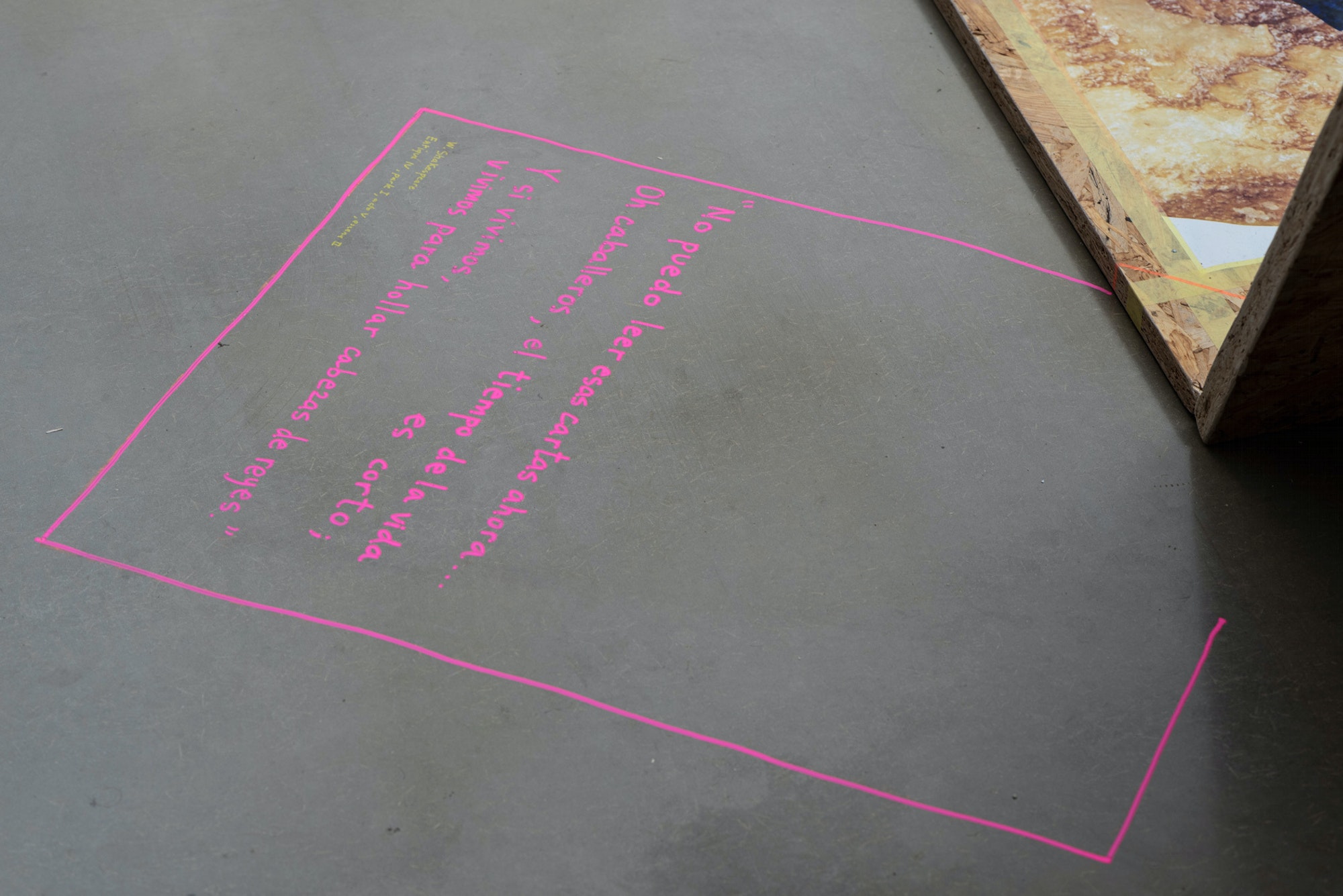 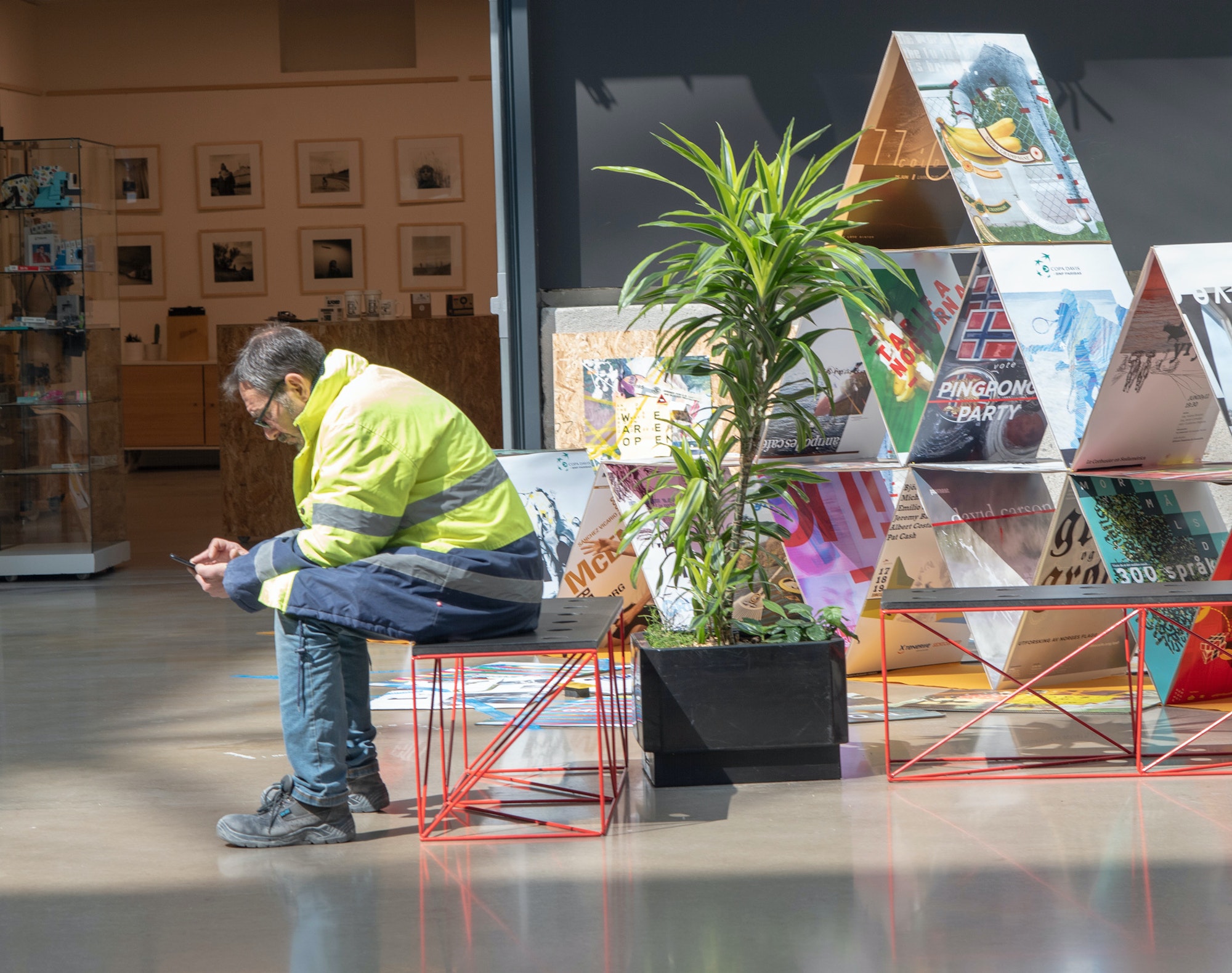 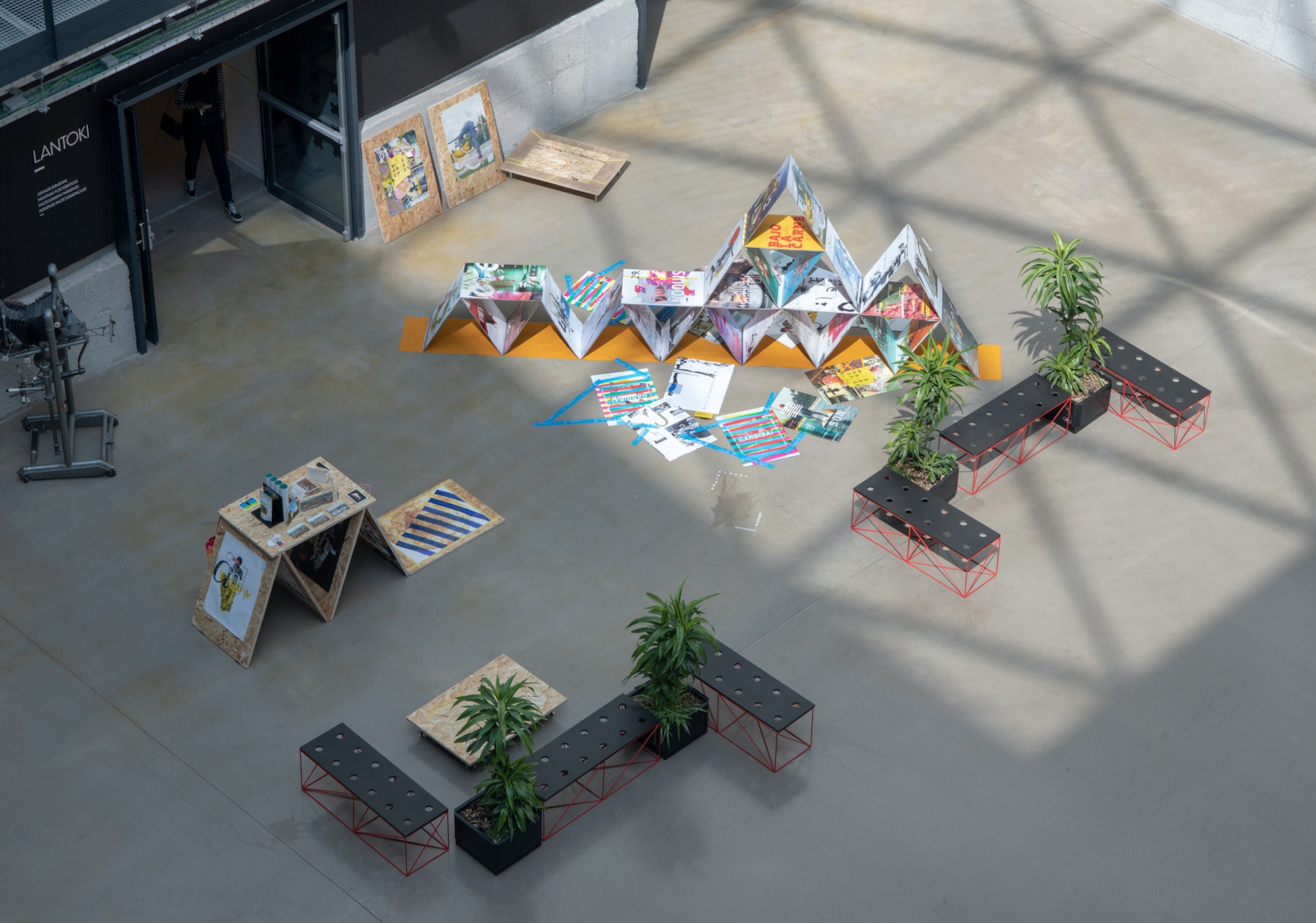