Text: Christina Skreiberg
Oslo, emerging as a hub for urban innovation and design, was chosen to host this year’s European Design Festival. On that occasion we’ve had a look at the award-winning brand Oslo City Bike. How did they become one of the most popular city-bike-services in the world?

Oslo as a laboratory
Well, it seems Norwegians do more than hang out in the woods. The population, which was last year rated as the happiest in the world, is also one of the most tech-savvy in the world and adapt to digitalization at a higher-than-average rate.

- In Norway we see that we can introduce new tech at a rapid rate. In addition, Oslo is a small city, but still a world capital with a dense city centre. Here we can roll things out on a smaller scale to test them before we take them to larger cities, says Johan Høgåsen-Hallesby, Chief Technology Officer of the successful local tech start-up Urban Infrastructure Partner (UIP) who’s behind the cities bike sharing service; Oslo City Bike. UIP has quickly become one of the city’s main tech-players. With their launch of Oslo City Bike in 2016, which is amongst the most efficient city bike services in the world, they have become a world leader in infrastructure technologies.

- The tech-savvyness of the citizens, combined with people’s love for the outdoors and their attention to sustainability and clean functional design, makes Oslo an ideal place to create and improve our infrastructure, says Høgåsen-Hallesby. The presence of his company’s bikes is in perfect alignment with Oslo’s goal to have a car-free city centre by 2019, which means there’s an urgent demand for an alternative mobility infrastructure. 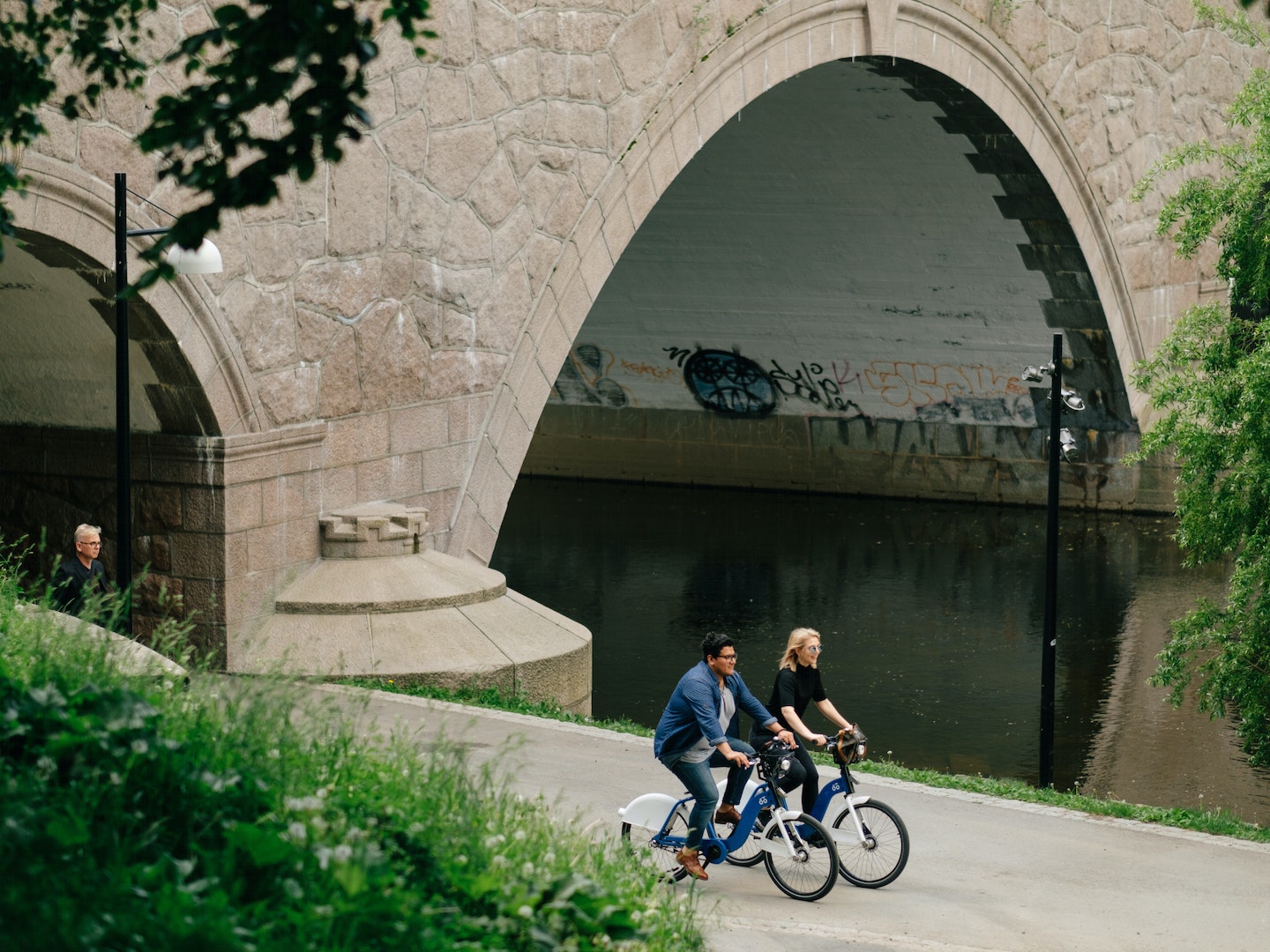 Klikk for å se bildet "Along The River" i full størrelse 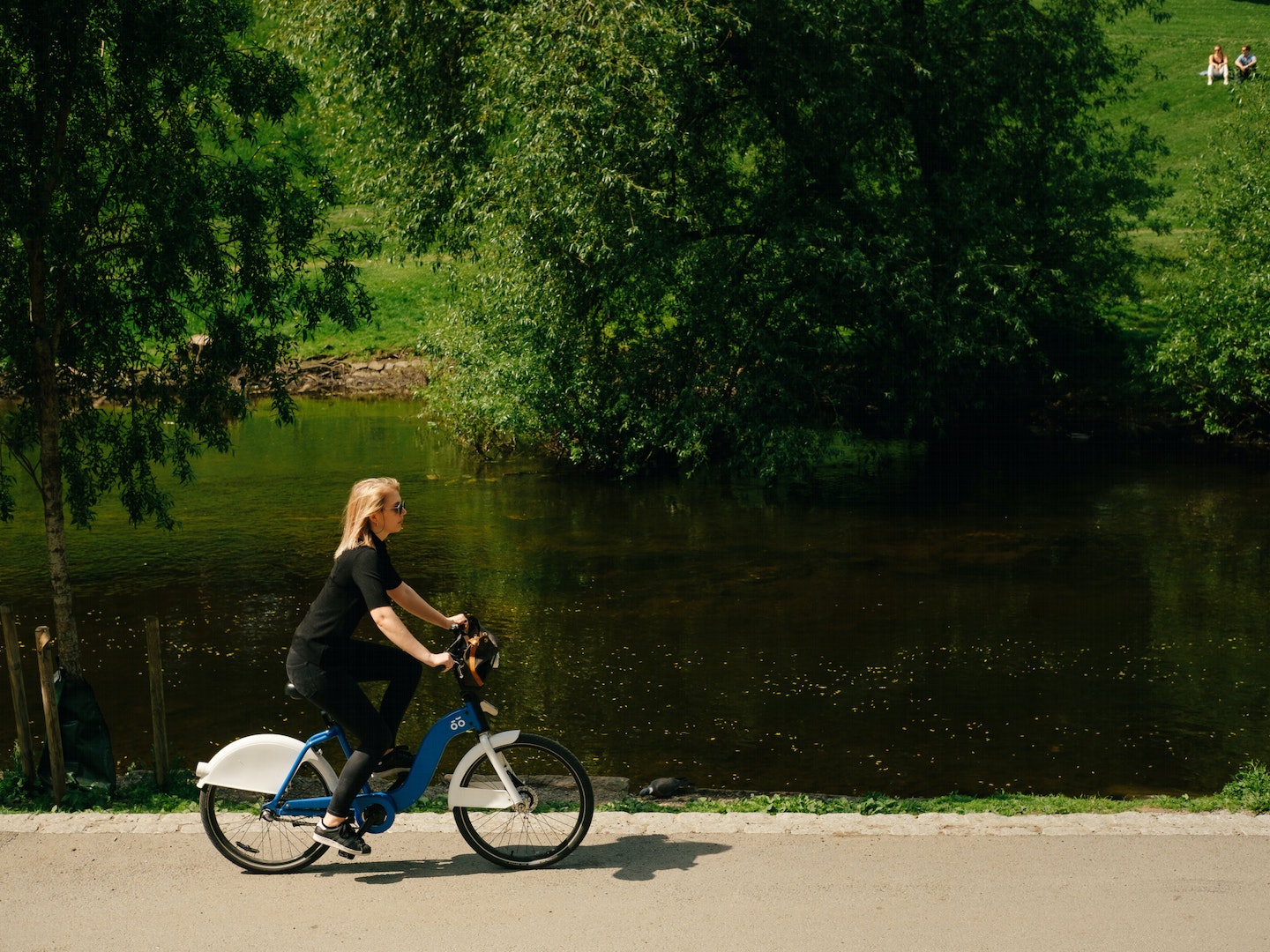 Tech boom
In recent years tech start-ups such as Urban Infrastructure Partner, Kahoot, No Isolation, Chooose, ReMarkable and Huddly, to name a few, have emerged out of Oslo. The city has also become a place to meet and network: the city has been chosen to host the European Design Festival which will be held in June, which is an arena for the most prevalent trends in European design. In 2017 Katapult Future Fest saw the light of day for the first time, a two-day yearly festival focusing on exponential technologies, impact investing and future societies. Investments in tech is also on the rise: from 2015 to 2016 the number of investments in Norwegian start-ups had a 300 percent increase (but Norway is still far behind their Scandinavian neighbours when it comes to tech-investment), and Investment schemes and accelerators such as StartupLab and Nordic Impact have emerged, helping start-up’s in the crucial early phase.

- Digitalization is one of the major global forces disrupting both the private and public sector. Oslo aims to be ahead of the curve, and show the world how new technology may help us create better local communities, and a city that is both inclusive and green. Oslo has the potential of becoming a leading star in urban innovation, with a digital mature population and high levels of trust. Our goal is to unleash this potential, says Oslo’s Deputy Mayor of Finance Robert Steen.

City icon
There has been city bikes in Oslo for years. But when Urban Infrastructure Partner took over the running of them in 2016, and their brand new light blue coloured bikes rolled onto the streets in April that year, they became an instant hit with the public. 50,000 people in Oslo used the city bikes that first season, and over 2.1 million bike-trips were made that year, according to the Oslo City Council. Since they took over the operation of the bikes in 2016, they have increased their use threefold. Each bike averages almost ten trips per day, making it one of the most efficient bike sharing systems in the world. In most cities the number is below 5. The bikes have become an important city-icon, and have appeared in the Norwegian TV-series Skam, as well as in other pop-culture TV-series.

- Riding the city bikes is a great way to experience Oslo. I often use the bikes to and from Univerisity, and during summer I jump on my bike to visit every corner of the city. It makes it easy to get around, says Sofie Hoff Fraser, a student and Oslo-resident. 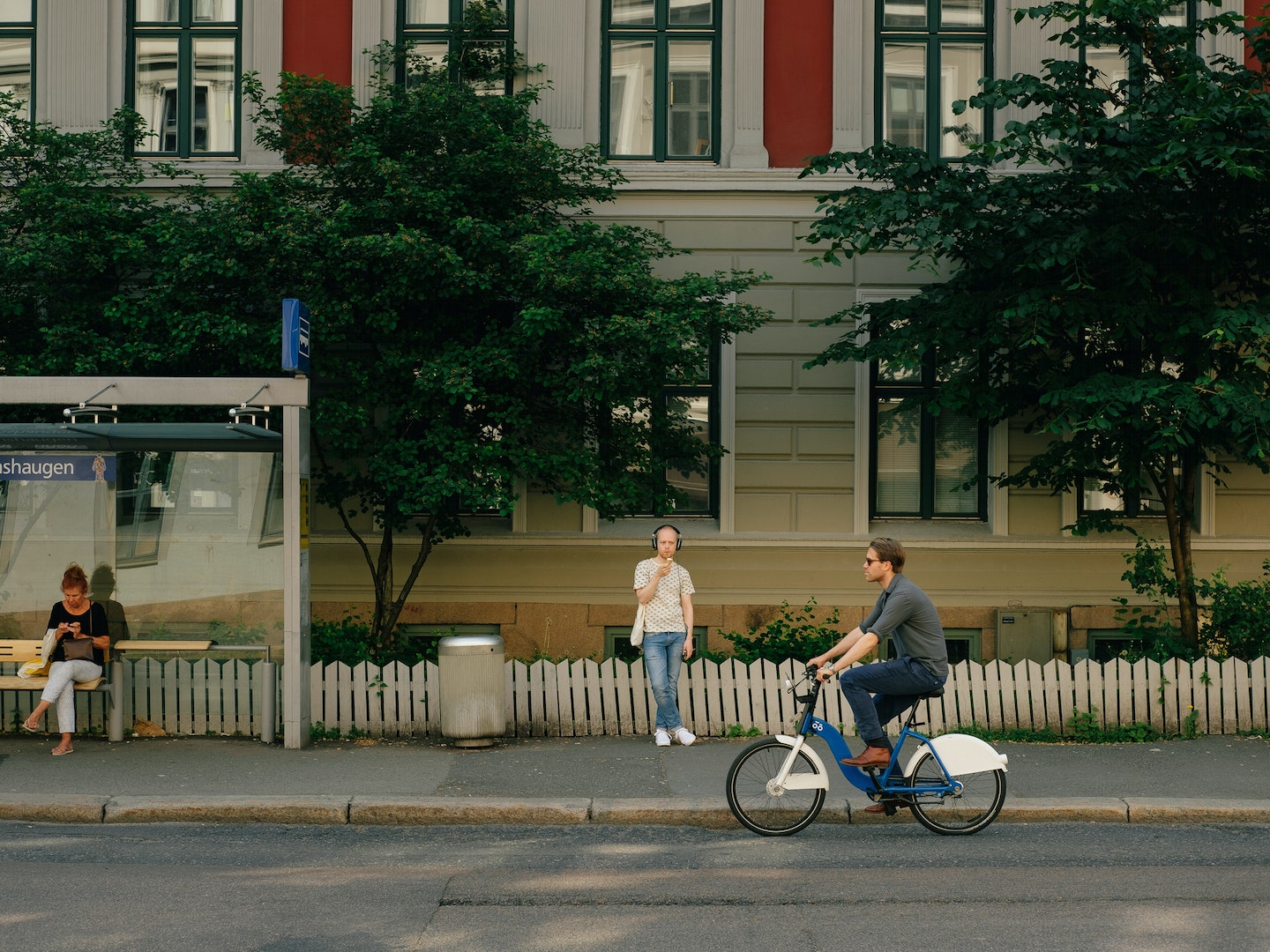 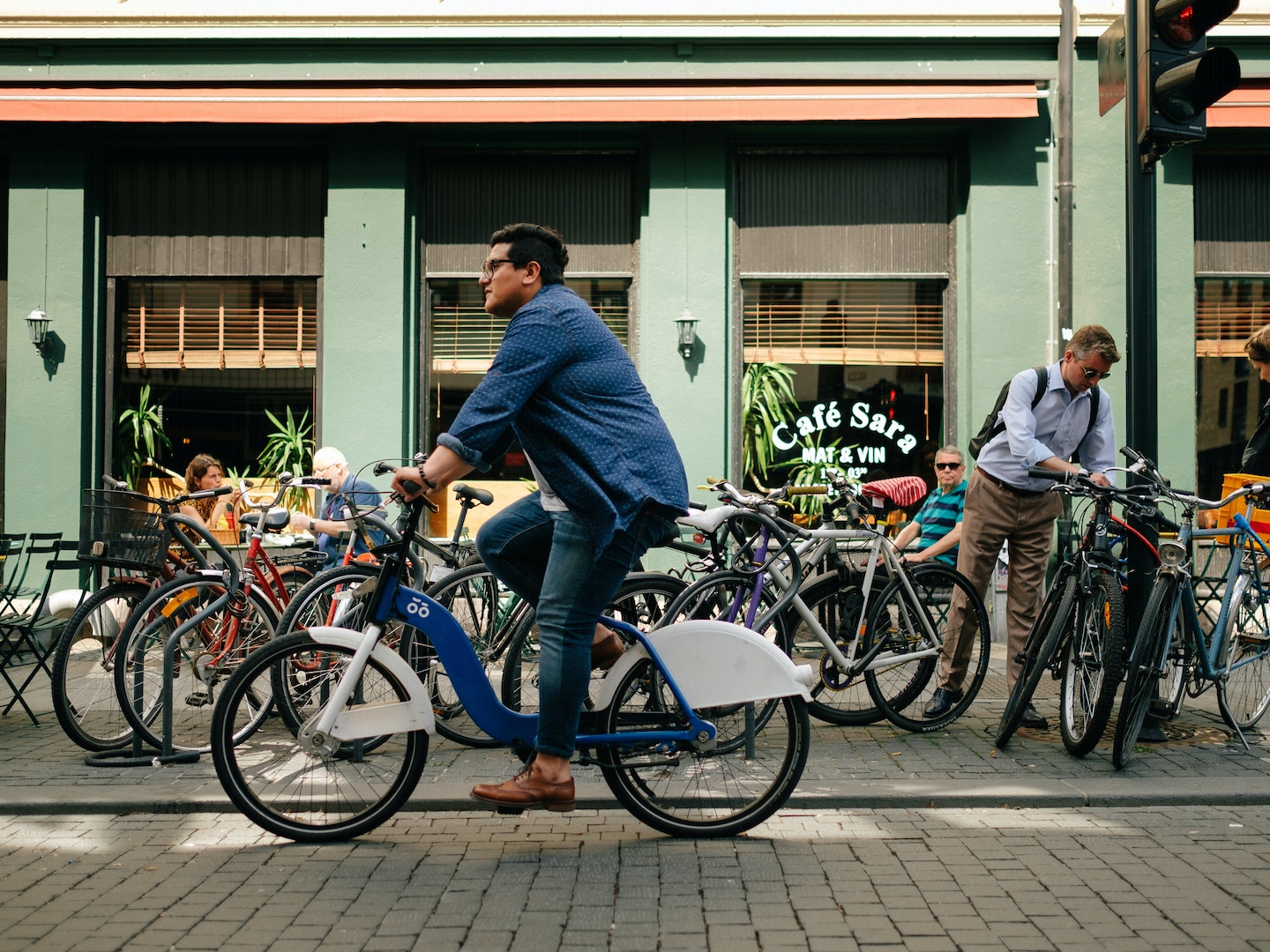 Urban mobility
Urban Infrastructure Partner started out as three-people start-up in 2015 and has since grown to employ 100 people in less than three years, with a team from areas such as finance, digital platforms, mobile, public transport, industrial design and mechanical and electrical engineering.

- Our primary goal is to create better and more efficient urban mobility. Many cities have approached bike sharing with a message of it being “eco-friendly”, which it is, but only if its actually being used. We see the environmental aspect as an important and obvious purpose of shared urban infrastructure, but we focus first on creating better, more integrated mobility. By applying the best technology to make bike sharing engaging and easy to use, we can create real change, says Høgåsen-Hallesby. Their system uses advanced software and data to manage the stations and movement of bikes and the public can enjoy the bikes by using an app that locates and unlocks bikes. 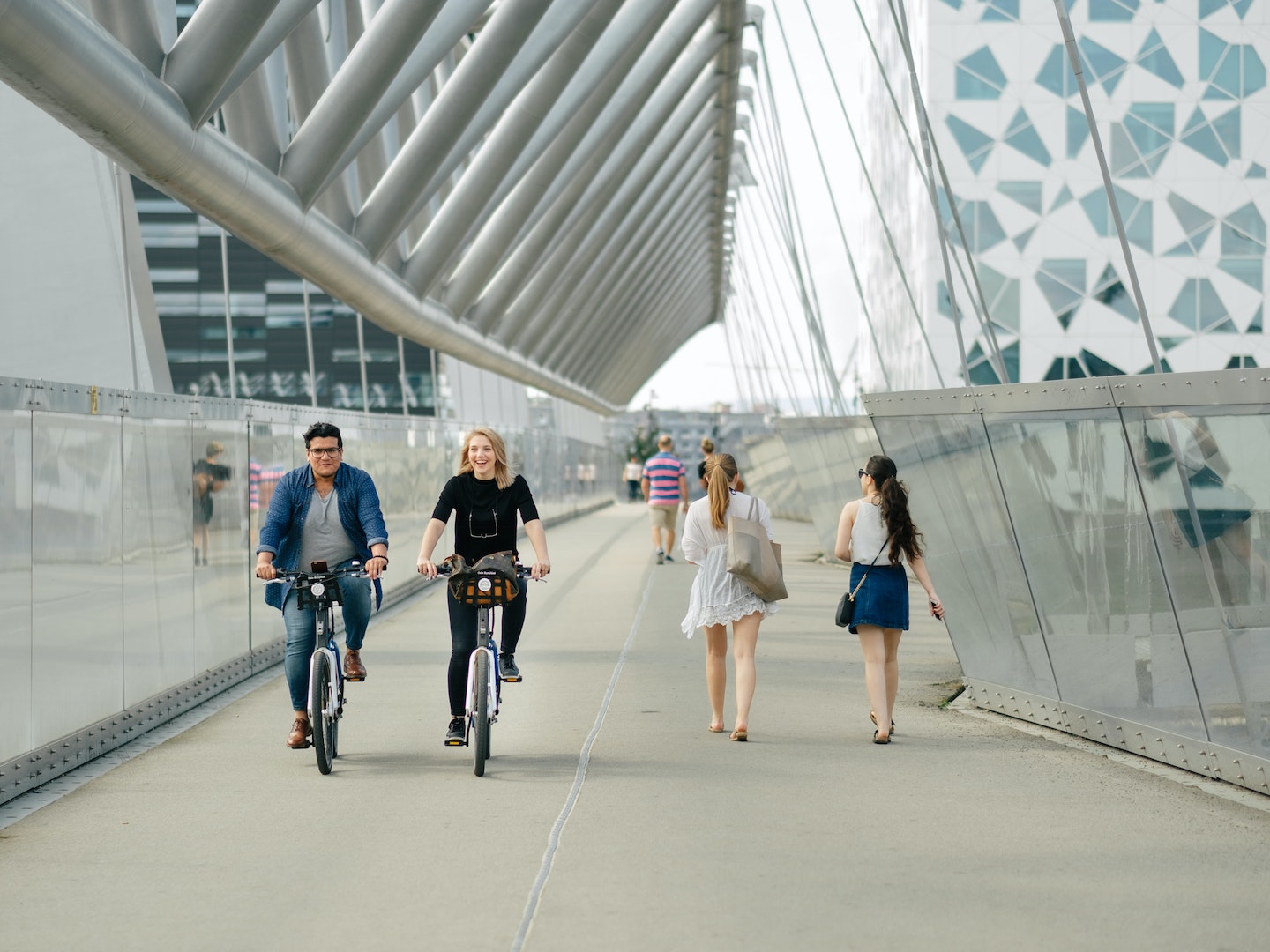 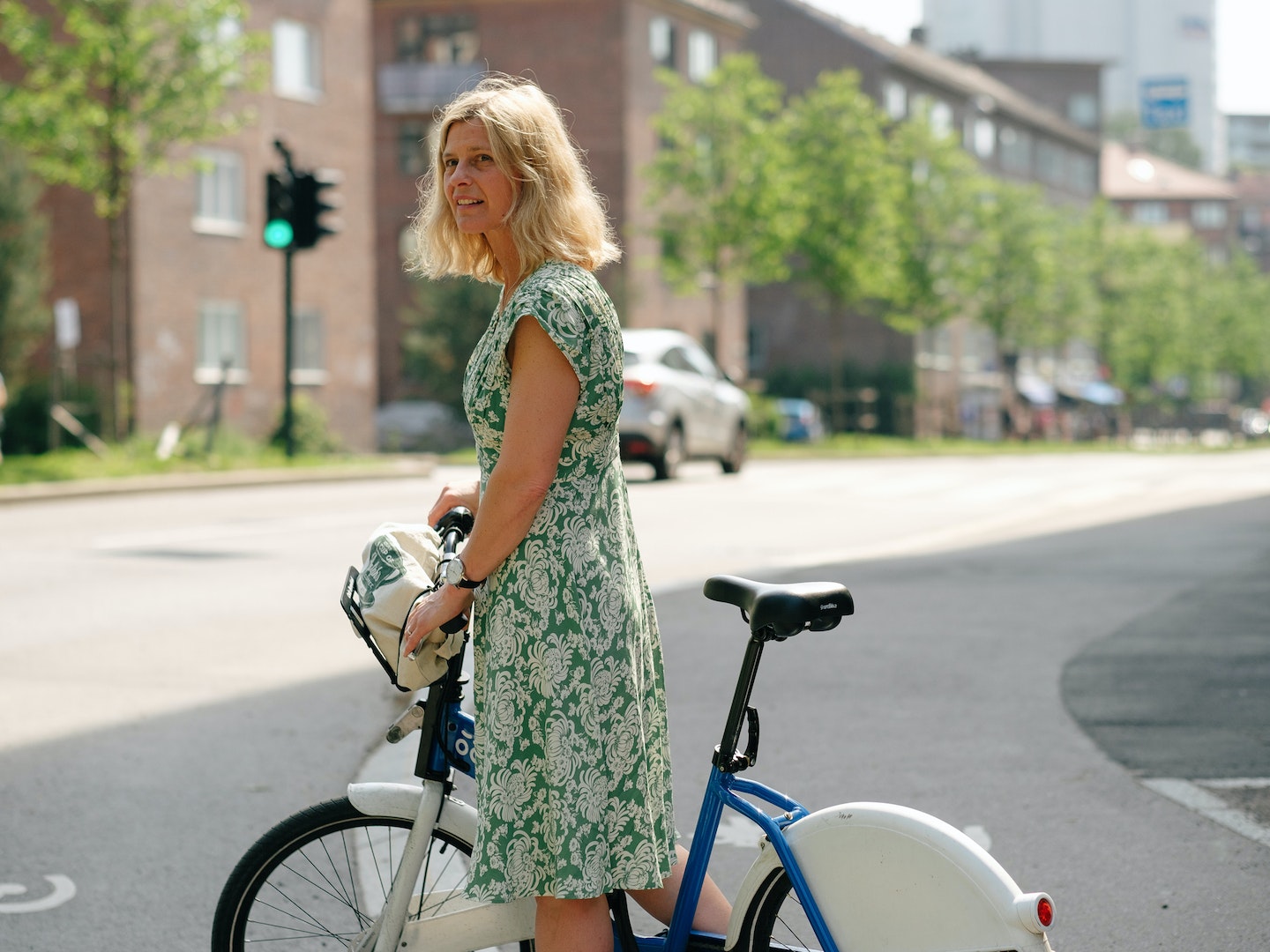 Emotional link
Award winning Norwegian-based design studio Heydays have designed the Oslo City Bike identity, which in 2017 won the prestigious Norwegian prize “Best-of-Show” in the yearly Visuelt-competition, awarded by Grafill, the interest organisation for those working within the field of visual communication in Norway. According to the jury, the brand has an “irresistible personality, which adapts to different situations. The colour- and font-palette make the identity timeless, and helps the identity to cling to the users. It’s simplicity allows it to communicate across languages and cultures.”

And the identity does just that; cling to its users. When using the app, the logo - which looks like a face, an expressive one that looks straight at you - takes on an animated form and communicates with you; it is happy when there are available bikes, sad when the rails are empty, it asks you to cycle carefully when it's raining and at night it’s asleep, like most of us.

- We wanted to keep it clean and useful, and aimed to create an emotional link between the product and the user, that’s one of the reasons why we created an animated version of the logo, says Stein Henrik Haugen of Heydays. To personify the bikes, each bike was given its own name - such as Krystof Andrej, Liv Marie and Karim – names that are among the 3000 most common names amongst the citizens of Oslo. When designing they also kept in mind that the identity had to work across uniforms, bikes, pick-up cars and monitors. And finally; the new logo and identity should also work in other cities and in other countries - local, but scalable. This year UIP will launch permanent city bikes in Bergen and Trondheim. They are also working on taking the technology to other countries.

- We had no clear brief when starting out. None of us had worked with city bikes before. This design process was very explorative, which made the process great, says Høgåsen-Hallesby. 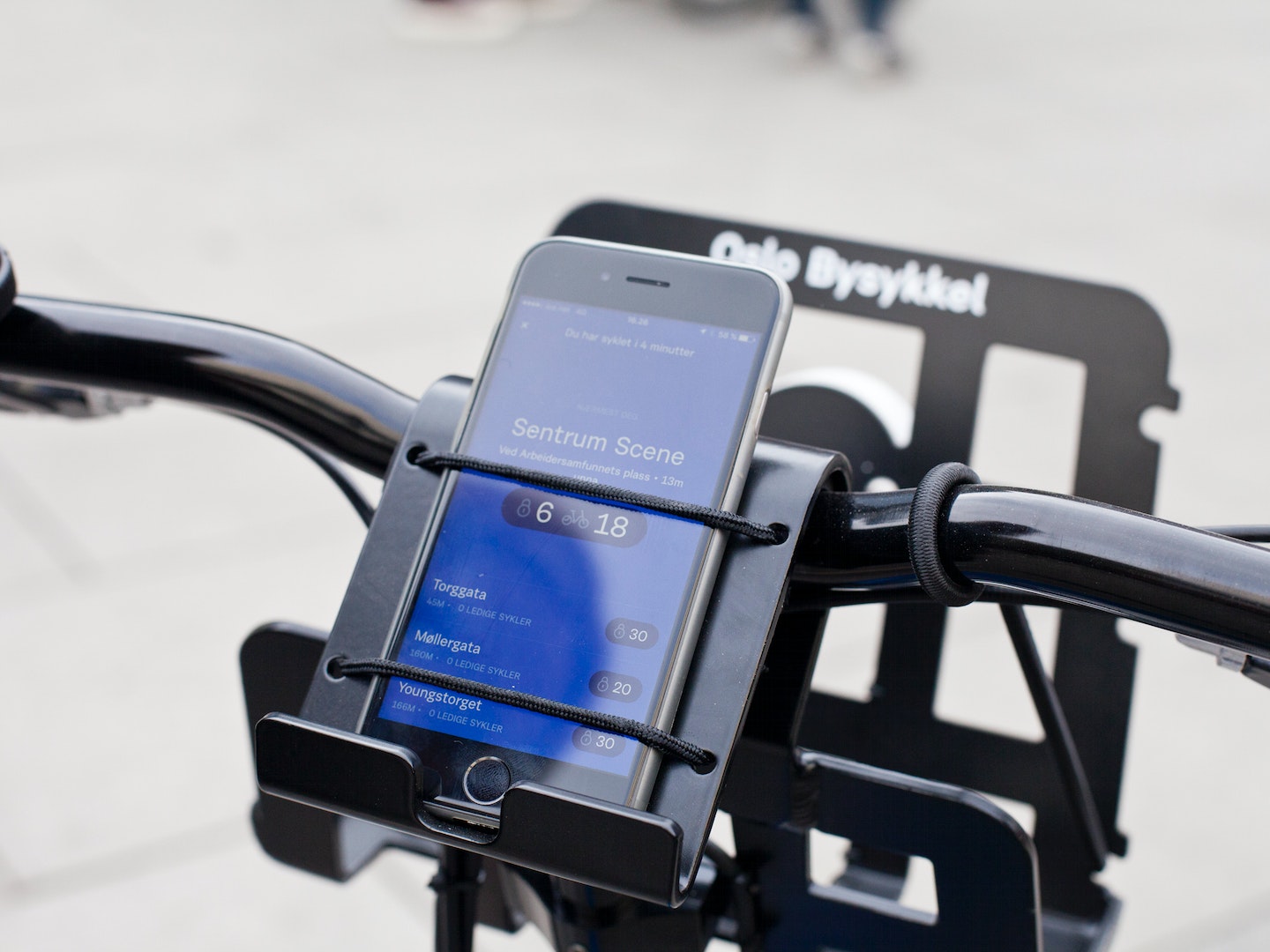 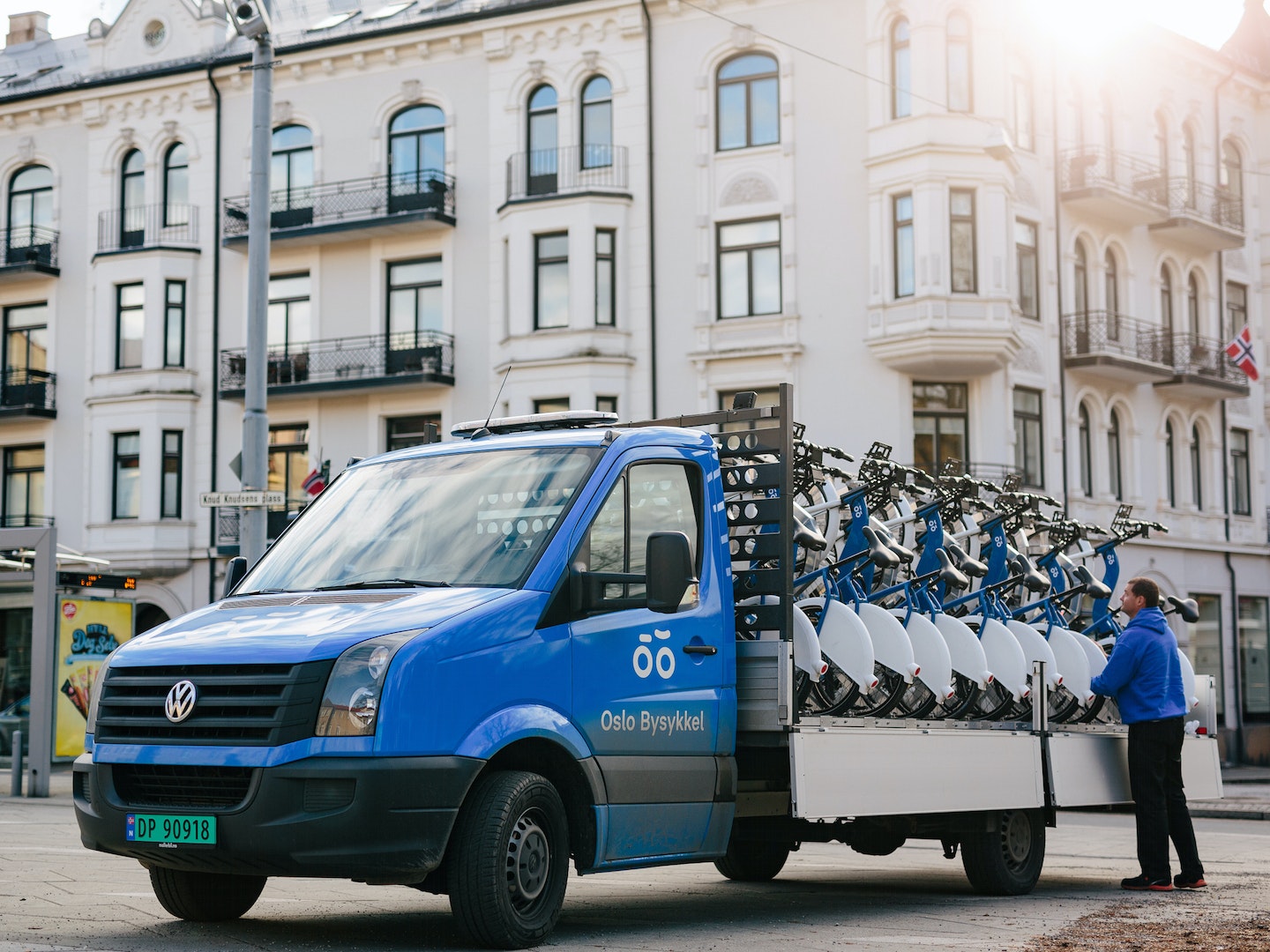 Success
So how do Oslo City Bike manage to differentiate themselves from city bikes in other cities around the world?

- Most cities and operators tend to focus on the hardware and the mere existence of a system. But all that really matters is effect. One of our fundamental goals is making the operations of bike share systems run more efficiently. This means using data and prediction analysis to optimize how, when, and where the bikes are distributed throughout the system. This approach creates more trips per bike per day, meaning the hardware is used in smarter ways. This also decreases the number of trips our rebalancing cars need to take, meaning that our resources are more sustainably used, says Høgåsen-Hallesby.

- Getting the user experience right, including identity design and interaction design, has been a crucial factor for the success of this project. Norwegians have high expectations when it comes to user friendly designs and easy-to-use services, which makes Oslo a great laboratory for developing new products. 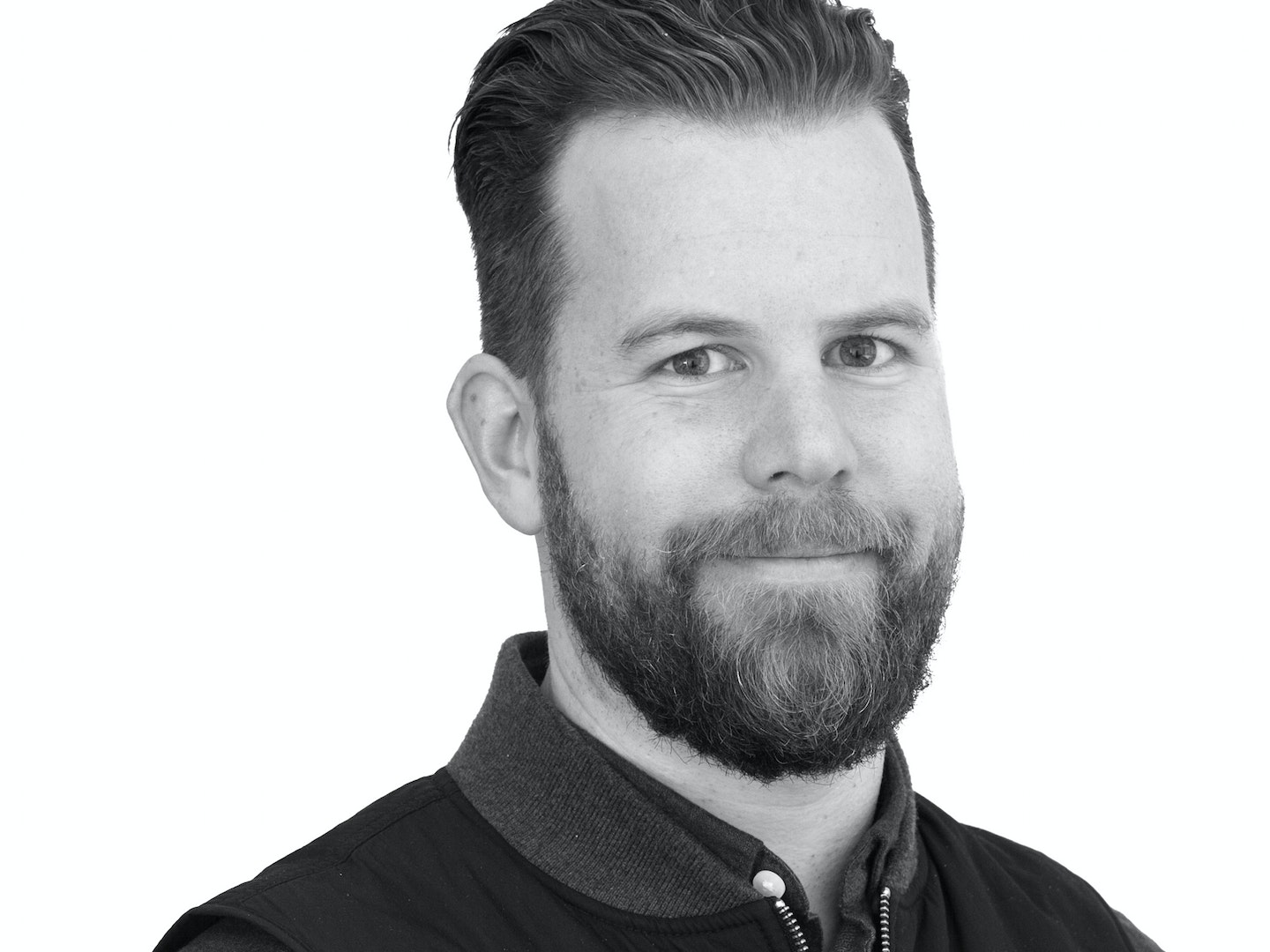 European Design Festival Oslo, 1 - 3 June 2018
Each year, the European Design Awards presents an arena for the most prevalent trends and themes currently impacting European design and illustration. The festival program this year is about new connections - about how change and truly great design often evolve at intersections of seemingly incompatible perspectives or mind-sets. Sometimes just playing around with things that normally do not go together is what opens a whole new world of possibilities. At other times the powerful impact of conflicting points of view will communicate a new idea or expose the need for supported change and social responsibility. This year’s program and events are all designed from a desire to challenge and change perspectives - for creatives from all over Europe to meet and expand their personal and professional networks while being inspired to think new thoughts. By bringing together new people and new perspectives we’ll have a ton of fun and create new connections that make a difference.